You are here: Home / Contributors / Seeds stumble at the business end of Birmingham 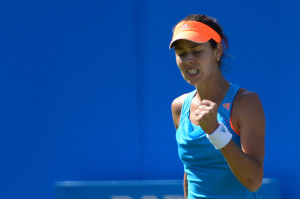 Chalkdust Chronicles – Seeds stumble at the business end of Birmingham

(June 13, 2014) BIRMINGHAM, ENGLAND – Hot on the heels of Sam Stosur coming out on the losing side of an all-Aussie affair was Sloane Stephens at the Aegon Classic on Friday in Birmingham. Earlier in the week she was asked whether this would be her shot at a final, but it looks like the tennis world will still be waiting, as she was brushed aside by Zhang Shuai 6-3, 6-1 for a place in the semi-final.

For the third morning in a row the American was opening up proceedings on the Ann Jones Centre Court, and while she seemed to be moving a bit better on another sunny day in Birmingham, her timing and range were a might bit off.

Zhang is almost an anti-Sloane Stephens in terms of their successes at Slams verses the tour. Stephens is very much one for the bigger occasions while Zhang has yet to win her first R128 at a Grand Slam. In fact last year she all but missed them.

More brushing aside, top seed Ana Ivanovic ploughed through a sometime tearful Klara Koukalova 6-1, 6-4 and proceeded to chatter enthusiastically about her plans after Birmingham.

“I’m going to actually be in London and train there and then, I have some also free time to go to the city a little bit and relax. We don’t get to do that much during the tournament, especially we stay in Wimbledon Village. It’s a good opportunity to do it the week before and let your hair down a little bit and not think too much about the matches yet. Then looking forward Wimbledon pre‑party.”

The dream run of Kimiko Date-Krumm ended a lot less glowingly than her great performance yesterday against defending champion Daniela Hantuchova, as it was her turn to be on the unfortunate end of a bagel.

Casey Dellacqua, who came back from a set down against fellow countrywoman Sam Stosur was on fire as Date-Krumm needed something a little more than her trademark tea to calm her fraying nerves as Dellacqua allowed the veteran just a single game in the match, as she sets up a semi-final against Barbora Zahlavova Strycova.