You are here: Home / Features / Ana Ivanovic and Barbora Zahlavova Strycova Shine in the Rain to Reach Birmingham Final 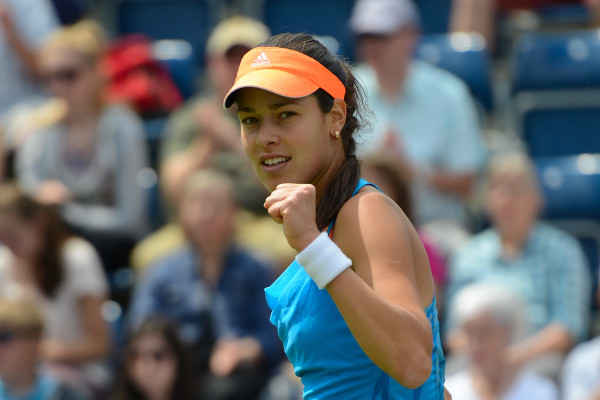 (June 14, 2014) BIRMINGHAM, ENGLAND – Yes we know that the Brits are obsessed with the weather, and one has to wonder whether they had an inside track to the Meteorological Office as it was a surprise to see Ana Ivanovic first up at the Aegon Classic. Well let’s face it, with no Sloane Stephens in the line-up, who else was going to kick things off!?

It was actually a worrisome start for the Serbian as Zhang Shuai started with a bit of gusto with an immediate break but Ivanovic spun off nine games in a row and by the time poor Zhang actually got back in the match, it was pretty much all over with a 6-2, 6-2 win.

“After slow start I really felt I picked up my rhythm and I played really well,” she said, ever the queen of understatement, but there is a real sense of maturity to Ivanovic that really started after Wimbledon when she called time on her two year coaching arrangement with Nigel Sears.

She has already snapped up two titles, a couple of wins over both Williams sisters – so another title is beckoning:

Ivanovic has come a long way from the excitable youngster that swept to a French Open title and the World No. 1 slot perhaps long before she was ready for all that, and there is something utterly engaging about her giggling her way through a press conference (when she’s won, anyway).

Perhaps the most amusing thing, when we look in the context of the young up-and-coming chasing packs of the Simona Haleps and Dominika Cibulkovas, her response when asked where she puts herself amongst these new-comers: “Unfortunately old. (Laughing.)“

Equally engaging has been she of the unnecessarily long surname – Barbora Zahlavova Strycova. She has crept through the draw where perhaps the top tip would have been someone from Down Under to grace the final, especially after a much-improved Sam Stosur fell to compatriot Casey Dellacqua. But the Czech also had a run of points that swept the momentum her way.

The second semi-final was beset with the rain, twice in one set and at 1-5 down in the tie-break, Zahlavova Strycova gave herself a bit of a talking to (and her coach too) and suddenly kicked into gear, taking the tie-break and going on to close out 7-6(5), 6-1.

Zahlavova Strycova was refreshingly frank about a six month suspension after testing positive a banned substance (sibutramine). Although the ingestion was deemed accidental and her sentence backdated and reduced, it still was a significant absence from the tour.

“First two months was tough. I didn’t want to play anymore because I felt like it’s really unfair what happened and I didn’t have motivation to come back.

“But thinking about it, I was also doing different things. I was living normal life, and I felt like I miss it. Then I start to practice, and I missed adrenaline, I missed the feeling of playing matches.

“Then I decided to come back. It was a good decision, and I see the tennis right now a little bit different than before. “

She has felt a little overwhelmed with her run here, and laughed when reminded that she trails Ivanovic 2-0 in their head to head, but those were on hard courts, and as we know – grass sorts out the wheat from the chaff, if you will excuse the agricultural metaphor.

Expect this to be a close one.