You are here: Home / Features / Birmingham – Ivanovic dominates on the grass, and the weather can’t halt the Rally for Bally 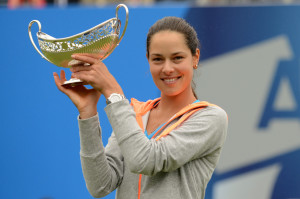 Chalkdust Chronicles – Ivanovic dominates on the grass, and the weather can’t halt the Rally for Bally

(June 15, 2014) BIRMINGHAM, ENGLAND – After a few days of sunshine the good citizens of the City of Birmingham had been lulled into a false sense of security, but it was another overcast day when top seed Ana Ivanovic took to the court for the final of the Aegon Classic.

It was another slow start too as she was broken immediately by Barbora Zahlavova Strycova as both ladies vied for their first grass title. But we have seen a very steely-eyed Ivanovic in play this week, standing inside the baseline to punish second serves, coming in to the net to volley, and pretty soon she was back to bossing the points.

The poor weather had seen a late night doubles match continue into the rain, and the preceding doubles before the final had the eventual champions using their badges to scrape the mud out of the little grass-court studs on their tennis shoes.

Barbora Zahlavova Strycova was having to do the same thing, angrily smacking her shoes at one stage as Ivanovic maintained her foothold in the match after breaking back, and surging ahead. The momentum stayed with the Serbian as she closed out a straight sets victory 6-3, 6-2 to pick up her first grass court title.

After some barren years following her time in the limelight as French Open champion and World No. 1 in 2008, it has taken Ivanovic a long time to find herself – and with a new Serbia team in place, she has looked more and more like the goofy teenager who hit the tennis heights all those years ago.

Zahlavova Strycova thinks that big picture for Ivanovic could mean a good run at Wimbledon.

She said: “Ana is playing great. She takes the ball very early, and it’s really tough to get the rhythm with her. She has some good chances to play great [at Wimbledon].”


The women’s final stopped just as the rain began to fall, which was unfortunate as the Rally for Bally was scheduled afterwards. The exhibition match to honour Elena Baltacha, the former British No. 1 who sadly lost her brief battle with cancer this year started once the dripping clouds had relented, and we caught a glimpse of just how competitive Martina Navratilova is, just how much Tim Henman wished he was on a golf course as he mock-struggled with his back, and the fun between Ward (a late replacement for Queen’s doubles finalist Jamie Murray) and Ann Keothavong as the lanky British No. 3 kept lobbing the TV pundit over and over!

In between their many impromptu breaks, Master of Ceremonies Dan Lobb tried to whip up support for the charity, but here Koethavong came into her own. A peer of Baltacha, the pair grew up together, played together and shared a special relationship and times, when they paired up to play doubles at the London 2012 Olympics.

Keothavong stood up and challenged those enjoying the corporate seating and hospitality to dig deep and give to the Rally 4 Bally cause, with the proceeds split between the Royal Marsden Cancer Hospital and the Elena Baltacha Foundation which administers the tennis academy she set up while she was still competing.

There was maybe an added poignancy for Navratilova who won her own battle with breast cancer, and admiration from everyone for Baltacha’s achievements – to have reaching the World Top 50 while managing a chronic liver condition, opening an academy while still competing, coming back after every injury when others would have quit.

People may think that the tennis world is full of drama, and perhaps even a little selfish as one of the ultimate solitary sports. But for one day, in three locations, a 30-year-old who left us too soon brought many people together to put life in perspective for all of us.