You are here: Home / Contributors / Victoria Azarenka, Back in Action but with Questions to be Answered 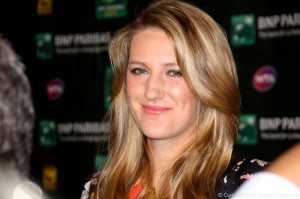 By Tumaini Carayol
(June 16, 2014) EASTBOURNE, ENGLAND – The sun rose on a new day, but before long a familiar noise was relentlessly piercing the morning atmosphere. At last, Victoria Azarenka was back. But there was no homely welcome mat to usher the fallen warrior back into the routine of the tour. Her first practice came on the courts adjacent to the media centre, and mere seconds were needed for the first complaints to ring out ironically louder than the apparent irritant. One person, voice dripping with abject disgust, simply couldn’t deal with it. Another rolled their eyes and wordlessly slammed the window shut. So, welcome back then, Victoria. Normal service already seamlessly back into motion before she even stepped onto the match court.

Azarenka’s practice continued in earnest, and in it there was much to take in. Ocular positives were on show as there came the distinct sense that she really was hitting the ball well. As rallies with her nameless hitting partner raged on, she rapidly fell into a rhythm of punctuating every winner that seared past her opponent’s face with a typically over exaggerated exclamation of “yeah”! Such was the frequency of the shout, her throat was probably raw and dry by the end.

But for all the clean ballstriking, there too are palpable issues. Her fitness remains the clearest, most obvious obstacle. Throughout the session she remained largely in one spot, hopping but rarely braving anything close to the full limits of her movement. After she struggled to recover her prime shape of 2012 post-injury in early 2013, the Belarusian is further away than ever. This is only natural, however, and it is perhaps true that an increase in her program.

The endless serve problems stand high up the list too. In the fall of 2013, Azarenka decided to completely demolish her old rapid abbreviated stroke and build in its place a full-blooded, lengthy motion. The problem is that it is disjointed, hitchy and lacking any rhythm among many others. She struggled immensely with it towards the end of 2013 and the beginning of the new year, and even in the nerveless confines of practice lack of match or general fitness is also palpable, throughout this session and the ones held last week during the men’s Queen’s event.

Soon, she was finished and it was time to greet the press. Three months had passed but again little had changed with the exchanges still testy and awkward as ever.

“Why not? Like, why not,” she croaked to queries of her decision to descend upon Eastbourne’s Devonshire Park. “I mean, what’s more exciting than Wimbledon? I just felt that, you know, I started feeling really good on the court, you know, playing with no pain. I just want to play. I couldn’t wait to play.”

“Once I felt that I’m healthy, I started practicing and I just wanted to play. So I’m here in Eastbourne to try to test myself in competition, you know. I have been tested in practice, but competition is a completely different thing.”

She also discussed her activities that took up her time away from the tour. Unlike Jelena Jankovic, who croacked about her passion of beach volleyball.

“Rehabbing, you know, staying at home, just walking with my dog and just living a normal, everyday life, which is very unnormal actually, still (smiling).”

“But I had a great time. I obviously missed tennis, I missed being able to travel, to compete. I think compete is the most what I was missing.”

Soon enough, it was time to go but the message projected was clear. Victoria Azarenka is back and even if she initially fails, beware.

Tumaini Carayol is covering the Aegon International for Tennis Panorama News. He is a freelance tennis writer for various publications, and also writes about professional tennis at his site Foot Fault. Follow his tournament updates on twitter @TennisNewsTPN.