You are here: Home / Contributors / A Look at the History of Queen's Club with CEO Andrew Stewart 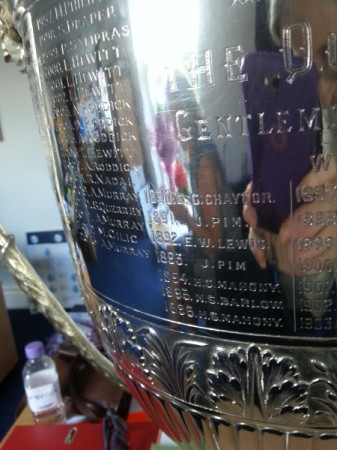 (June 16, 2014) LONDON – In one week every November at Queen’s Club, says Andrew Stewart, the club’s CEO, you can find three world champions in action side by side within 100 yards or so of each other. He doesn’t mean three top tennis players. He means the world champions of three different racquet sports: members of the ATP’s top eight, who like to practice here on the indoor courts during the world championships, held across town; the top ten rackets players participating in the Rackets Invitational; and finally the top real tennis players competing in the British Open.

“I don’t think there’s anywhere else in the world you can see that.”

Stewart describes rackets with enthusiasm, quoting the famed 20th century commentator Dan Maskell, who began his career as a ballboy-turned-tennis pro at Queen’s, as saying that rackets was the greatest spectator sport he’d ever seen. During the pro tennis tournament, however, you can’t peep in to find out: the rackets courts are where they put the players’ lounge. Stewart himself no longer plays tennis; his sport is cricket.

Currently properly known as the Aegon Championships, the Queen’s Club tournament, held two weeks before Wimbledon, is one of the oldest on the men’s calendar. The first edition was played in 1884; it moved to Queen’s in 1890 and has been held there ever since, though not continuously. There were breaks for both world wars, and another from 1973 to 1976. At that point, Frank Lowe, a club member who worked in advertising, found the tournament commercial sponsors, and the tournament has flourished ever since. The 1970s were also when the tournament moved from its original timing two weeks after Wimbledon to its present place in the calendar.

From 1890 to 1973 the tournament included a women’s singles draw; men’s and women’s doubles and mixed doubles were added in the early 1900s. After 1973, however, the women formed their own tour and haven’t been back. Like almost all the male winners, the female winners were an elite lot who typically made – or won – Wimbledon finals, players like Ann Jones, Christine Truman, and Maria Bueno.

Stewart believes it’s unlikely the tournament could follow the current trend of becoming a combined event: “The difficulty here is, you’ve got to remember that the members are paying a subscription to play on their courts – and they don’t get on them.” They are indeed: a list of subscription fees posted on the wall gives the present rate for non-shareholding members as a little over £3,000 a year – something over $5,000. Despite the size of that fee, Stewart objects to the general characterization of the club as being full of “toffs” – a recent article in the Times recently claimed that there were no pictures of “the bad boy from the back streets of Australia” in the clubhouse. Wrong on two counts: first, because there are plenty of such pictures; second, because Hewitt’s name appears on the list of honorary members to be found hanging on an upstairs wall. The club reportedly despised McEnroe back in the 1970s – but these days the club embraces all its distinguished former champions.

“They love their sport,” Stewart says.

Stewart says the members love the tournament and appreciate its benefits to the club; nonetheless, as he describes it the disruption is considerable. All the stands and decorations take two months to build every year and another month to take down. So most of the club’s ten grass courts – plus the indoor courts, since those are used for players’ lounges as noted above – are unavailable to members for the months of May and June. The groundsman, Stewart Kimpton, as per his instructions, gets four grass courts ready for the members’ use a couple of weeks before the tournament; from the day after the tournament the members can play on the grass courts until October. Overall, the club has ten indoor courts, a couple of which were built in the 1880s and were used in the 1908 Olympics.

“We were delighted it went to Wimbledon,” he says of the 2012 Olympics.

The club originally opened its doors in 1886 as only the world’s second multi-sport complex. In those early days, it hosted rugby, football, and many other sports; it even had a skating rink. At the time, the biggest sporting events of the year were the competitions between Oxford and Cambridge; the club’s colors still reflect that: blue for Oxford and Cambridge; red, reflecting the military background of many members in the early 20th century; and white, for the Corinthians football club that used to play there and had a particular ethos of playing hard – but fairly. So Queen’s Club was the host for all those Oxford vs Cambridge competitions – rugby, athletics (the British term for track and field)…and tennis, among other racquet sports. These days, the club aims to have courts matching every surface the majors are played on: it has 33 in all – grass, French clay, indoor, and hard courts.

The year Stewart joined was interesting timing: the year before, the Club had changed ownership. The background: the 1950s were a tough time for Queen’s Club. The difficulties had their roots in the early 20th century, when nationalism began to enter sports. Britain began building national stadia to house sports like football, cricket, and rugby, and the headquarters of those sports migrated there, with interested members following them. Queen’s Club became a specialist in racquet sports: tennis, rackets, real tennis, and squash. Second, a number of members died in military service during the two world wars. The upshot was a struggle to keep the club going – which was eventually solved by selling it to the Lawn Tennis Association in 1951 for £50,000. By 2005, when the LTA decided to move its headquarters and put the club up for sale, the asking price had escalated to £45 million. Alarmed at the thought that it might go to developers – this is 11 acres of prime real estate in central London! – the members pushed for the right to buy it back. The purchase price was eventually agreed at £35 million, all but £6 million of it raised from the members themselves. The £6 million has been repaid, and the club expects to have paid off its debenture holders by 2022.

Stewart explains all this in a deep radio voice wearing an air of authority that might make you think he’s been part of the club forever. In fact, he only joined in 2008 but, he explains, “I’m ex-Army. I was in the military. I was in a regiment my father was in and my grandfather was in, and I believe that history is essential to the ethos of anything that’s any good. I think the joy about Queen’s is that it is steeped in history.” He looks forward to adding to it: “If Murray wins next year and become the sixth four-time winner [in the Open Era], could he become the [first five-time winner]?

The Club’s history is hung all over its walls, from the 1980s advertising poster caricatures of players such as John McEnroe, Jimmy Connors, and Stefan Edberg, to the carefully compiled framed photographs and explanatory placards documenting the history of rackets, real tennis, and court tennis.

Which brings us to the most obvious piece of club history, the trophy, a giant silver cup, probably the largest trophy anywhere on the tour. It memorializes many iconic moments: the moment when John McEnroe arrived as a player, or the shock emergence of 17-year-old Boris Becker. The person who brings it in to show, gleaming and newly polished, puts on white gloves before touching it and lifts it gingerly by both handles. The engraved names of past champions circle the cup in columns, beginning in 1890. There are only three spaces left. Stewart has a plan for this as so much else: the club will add a black base to house the post-2016 champions. Meantime, he tells me a clever bit of coincidence: Andy Murray’s name, in 2013, just happens to line up perfectly next to the Irish player Joshua Pim, the champion in 1893. This pleases Stewart because: in 2013, Murray also won Queen’s and Wimbledon in the same year.

Chris Northey: The voice of the club
The personality of a tournament is all about the details. At Queen’s, one such detail is the former stage, screen, and TV actor Chris Northey, the club’s announcer. A glance at his IMDB entry shows a career spanning some 30 years and including small parts in TV productions of Reilly: Ace of Spades and An Ungentlemanly Act, and the movie Morons from Outer Space.

From a small room with an arched window at the top of the club, Northey has introduced every match and every player. His acting experience – he was trained at London’s prestigious Royal Academy of Dramatic Arts – means he knows how to use and care for his voice so he doesn’t get laryngitis. As the game has expanded internationally, he’s found some of the less English names a struggle.

Northey has always loved tennis and still plays “as much as my wife will let me”. He landed the announcer’s job after a recommendation followed by an audition. Long a part-time coach, some years back, the club offered him a second job, organizing the members’ play in club sessions at weekends. He accepted, happily: “My job was my hobby.”