You are here: Home / Features / Wozniacki Earns a Hard Fought Victory Over Giorgi 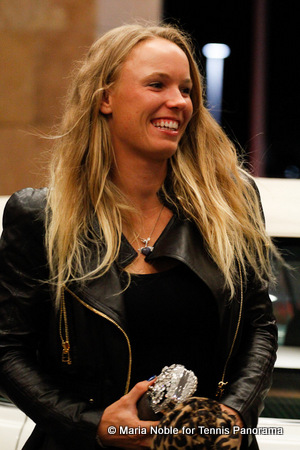 By Tumaini Carayol
(June 19, 2014) EASTBOURNE, ENGLAND – Tiebreak. Set point to Camila Giorgi. One serve to seal it all off. A slick, defense-splitting backhand crosscourt from Caroline Wozniacki‘s racquet followed, bouncing squarely on the line and sending the Italian speeding off as a canyon of a gap was left fit for a bus to power through. But just before the Dane made contact with the second blow, a stutter of a “corr-” blazed through the mic.

Mayhem. Chaos. The abruptness of the pause, the word “correction” sliced into one syllable of unspeakable horror, had the dramatic effect of the umpire slapping a hand to her mouth in brazen shock. This mistake from the usually spotless Alison Hughes was the equal of all fifty-odd Giorgi unforced errors, and everyone knew it. As Wozniacki marched up to the helpless umpire to let her have it, a shout from one of the few younger people populating the crowd: “Give her beef, Caroline!”

Well, in this match there was beef and there was chicken and there was pork and an assortment of salads, too. All dramatic and nothing bland. In the very next set, with the score on serve and Giorgi up 4-3, a man collapsed in the fairly average British heat. It happens surprisingly often – spectators taken ill in the midst of a battle. But this was different. As the man lay there in plain view of it all before eventually being transported out of the arena, play was suspended as both women marched off court before eventually returning a period later and warming up all over again.
I could hear ‑‑ there was some noises to start off with, and I could see them carrying him to the stairs,” Wozniacki said afterwards. “Then I just saw him lying there for maybe 10 minutes. […] “(We stopped because) he was still lying ‑‑ we could see him still, and I think there was going to be a lot of things happening. Obviously a life is more important than the tennis.”

There was some good tennis, though. Giorgi, with her unflinchingly aggressive game, pounded out backhand winners and stormed the net with an urgency of a madwoman chasing the last bus. Wozniacki was stifled as usual, but she served exemplary throughout and came up with a couple of wonderful shots. There too was plenty of poor, substandardness. Wozniacki’s usual passivity and poor, depthless forehands were omnipresent as usual. Meanwhile, Giorgi also pounded out forehand and backhand errors alike. Worst of all, though, was her single-minded unrepentant aggression that hit its peak on return. Despite her struggling to time every last return and the bounded off her racket exclusively late, she continued to stand acres inside the baseline and was offered hoards of free gifts on return to Wozniacki as if it was her birthday.
Back at 6-5 in the first set tiebreak, the madness continued. The point was eventually replayed and a spot of justice peeked from the clouds of injustice. The Italian had been laughing at fate all match, all career, powering down laughably reckless serves over 105 miles-per-hour and more. On the replayed set point, fate had the last laugh as a double fault reeled off Giorgi’s strings. Well long. Wozniacki responded with a fist pump, Giorgi responded by demolishing a ball straight into the crowd and she may or may not have hit a spectator in the face. A warning flew her way, but she eventually won the set before the final two sets fell the Dane’s way. The win for Wozniacki set up a semi-final with Angelique Kerber, an easy victor over Ekaterina Makarova. On the other side, Heather Watson benefitted from Petra Kvitova’s withdrawal to become the first British Eastbourne semi-finalist in 32 years.
Tumaini Carayol is covering the Aegon International for Tennis Panorama News. He is a freelance tennis writer for various publications, and also writes about professional tennis at his site Foot Fault.