You are here: Home / Front Page News / Li Na and Victoria Azarenka Through to the Second Round at Wimbledon

(June 23, 2014) WIMBLEDON – No. 8 Victoria Azarenka is back on track, while No. 2 Li Na was tested in the first set as both women advanced to the second round of Wimbledon on Monday.
After five months without a win due to a foot injury which kept her off the tour, Azarenka beat Miriana Lucic Baroni 6-3, 7-5 to make the second round of Wimbledon.
“Well, I’m just very happy to be able to play,” Azarenka said.  “This is what I love to do.  The best feeling is to play pain-free.  That’s what’s important for me.
“I think, you know, getting the game together and the timing, it’s all a long process.  But the important is that I’m there, you know, 100%.  My focus is there.  My desire and concentration is there.  So that’s what all I can ask for in myself
The Belarusian spoke about her recovery, “the toughest part about the time off and my rehab in particular was that I didn’t know when I was going to be able to go on the court because it was mostly a day-to-day progress and how it was going to feel.
“Some days it was getting much better.  Some days were a little bit setback.  That was the most difficult part.
“Once I start moving, I start feeling well, once I got on the court, you know, I didn’t really feel like, Oh, I’m missing about a hundred balls, but it didn’t matter, it was just important to actually hit the ball.” 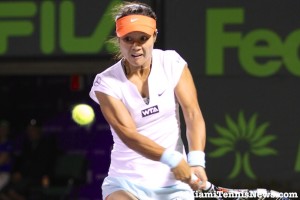 Li Na had a 7-5, 6-2 win over Paula Kania of Poland. Na rallied to win the last four games to close the first set.
The Chinese woman said she knew nothing about her opponent coming into the match.
“Zero,” Li Na said.  “I will try to find something on the Internet, but I cannot.
“Two or three days ago I was practice with another player, and her coach say, I think she has good forehand.  I start to play her backhand today, and she didn’t miss one shot.
“So I think I need to talk to the guy later.”