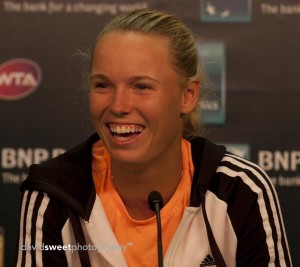 (June 24, 2014) WIMBLEDON – Caroline Wozniacki cruised into the second round of Wimbledon on Tuesday with a 6-3, 6-0 win over Shahar Peer.
Wozniacki who was recently engaged to golfer Rory McIlroy, says no to internet dating.
When asked by a reporter about it, the Dane said: “I think I’m not that desperate.  To be honest, you know, I’ll just see what happens.  I’m perfectly fine being single at the moment.
“It’s pretty hard to sweep me off my feet.  It would have to take someone very special.  You know, you never know.  I guess when you least expect it, it’s going to come.
“Right now I’m just into my tennis.  And playing here, it’s great.  That’s what I’m focused on.”
Related articles: