You are here: Home / Features / Victoria Duval Joins Pack of Young U.S. Women into Second Round of Wimbledon 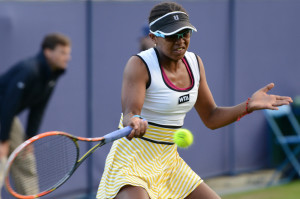 (June 24, 2014) WIMBLEDON – No. 114 Victoria Duval came through Wimbledon qualifying with a back injury last week. This week she’s taken out 29th seed Sorana Cirstea 6-4, 3-6, 6-1 in the first round of Wimbledon. Born in Miami, the 18-year-old of Haitian heritage, playing Wimbledon for the first time, joined a group of young American women making their All England Club debut including Madison Keys and Alison Riske advancing to second round.
Duval had reached the the quarterfinals of the Wimbledon Juniors back in 2011.
She announced herself last year when she took out 2011 U.S. Open Champion Sam Stosur in the first round of the U.S. Open. ” That was one of my best playing days that I can remember,” said Duval.
“I have my expectations of myself,” Duval said. “I’m not thinking about following up a win. I’m just thinking about winning all the time.”
She said it was “pretty crazy” to think she was actually playing at Wimbledon and that it did not sink in until during the third set.
Duval had reached the the quarterfinals of the Wimbledon Juniors back in 2011.
Madison Keys, 19, who won her first WTA title three days ago in Eastbourne, finally got in the win column against Monica Puig, defeating the woman from Puerto Rico 6-3, 6-3.
“She’s a great player and we’ve played a couple of times,” Keys said.  “She’s beaten me a couple of times.
“But I was really just trying to go in and just stick to my game plan, not really worry about who is on the other side of the net.”
Alison Riske joined the USA party by upsetting 26th seed Anastasia Pavlyuchenkova 6-4, 5-7, 6-1.
Missing out on the winning experience was wild card Taylor Townsend who fell to 31st seed Klara Koukalova 7-5, 6-2
“Definitely it was a great experience,” Townsend said despite the loss.  “I’m really glad that I was able to get the wildcard and be here, first and foremost.
“I definitely am not pleased about my match, but it’s just a learning experience really.  I’m just going to take what I’ve learned over the past two slams.  I’m going to go back home.  I’m going to work extremely hard and get ready for the US Open Series.
“I have tons of tournaments to look forward to and a lot of great things are ahead, but it’s time to just put my head down and work again.”
“There are a lot of things I still need to work on in my game,” said Duval. Improving mentally, physically and getting stronger.”
Duval will face an opponent younger than herself in Belinda Bencic.
“I’m looking forward to it, it should be very exciting,” said an enthusiastic Duval.
“My goal is to win a couple of more rounds,” she said. “You come into a tournament hoping to win it.”
“My goal was top 100,” which she has reached by virtue of her win on Tuesday. “Keep improving keep winning.”

Q & A with Victoria Duval at the Sony Open