You are here: Home / Contributors / Defending Champ Mahut Feels Like Home in Newport 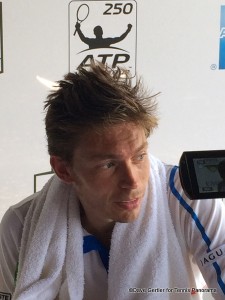 (July 8, 2014) NEWPORT – Day Two of the Hall of Fame Tennis Championships promised plenty of top-seed grass court action for the tennis-loving community of Newport, Rhode Island, but it delivered much more than the crowd expected in terms of match quality and edge-of-your-seat drama.

Thirty-two-year-old Nicolas Mahut played his first round match against Argentina’s Facundo Arguello, the only Spanish speaker in an ATP 250 main draw that started with 14 North Americans and 4 Australians, out of 32 players. The French fourth seed, also the defending his 2013 Hall of Fame Tennis Championship title, was largely untroubled by the 21-year-old world No.119. Although Arguello was able to force a first-set tie-break, he was unable to create any break point opportunities in a match that lasted 1 hour, 30 minutes.

Mahut seemed comfortable in the New England surroundings. “Of course, I feel like almost home. I played, I don’t know, maybe ten times (in Newport), and I know everybody here. I have my habits, I go to the same restaurant with a French manager.” The world No. 59 was dominant in the match’s only tie-breaker, only allowing his younger opponent 1 point, saying, “I’m ten years older, so I get more experience. And that helped me in the important moments. Like in the tie-breaker, first set.”

While this predicted result was playing out on Center Court, a minor upset was taking place on Court 2 where Canadian Peter Polansky and Australian Luke Saville were contesting for a spot in the second round to face the winner of Mahut/Arguello. Polansky and Saville, ranked 133 and 184 respectively, started nervously, particularly Polansky, who is yet to win a main draw ATP match this year, and who served three double faults to break himself in the first game. Saville also opened his serving campaign by getting broken, but would soon right the ship, becoming the steadier of the two, and ultimately scoring his first career ATP main draw match, outside of a grand slam.

”I feel like mental toughness is probably the biggest part of my game, my biggest strength,” said Saville, “I think he let (the conditions) affect him a lot more than me today, which I was quite happy to see him get a bit frustrated out there. I’ve been serving well, been getting a lot of free points when my first serve lands. I’ve gotta keep serving well, keep staying mentally tough, keep trying to get to the net, try to get the first big shot in the rally and get him on the defense.”

Saville, who grew up playing on Australian grass, and has a Junior Wimbledon trophy under his belt, is relishing the opportunity his next match, Wednesday’s opening match on Center Court, will bring. “I’ve got a tough match next round against the defending champ Mahut, so I’ll go out there and give it my best crack. I believe I can win out there.”