You are here: Home / Contributors / Top Seed Isner Advances, Hewitt Guts Out a Win Over Harrison 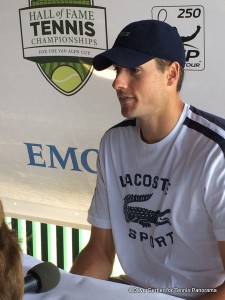 By Dave Gertler
(July 8, 2014) NEWPORT – Tuesday was always going to be an exciting day at the Hall of Fame Tennis Championships in Newport, Rhode Island, with a defending champion, No.1 seed, and a dual grand slam champion in action. All three – Nicolas Mahut, John Isner and Lleyton Hewitt respectively – would advance through their matches to round two, but it was the manner in which, in particular, the latter did, that had the New England tennis enthusiasts on the edge of their seats.

Two-time champion John Isner managed a late charge from his first round opponent, qualifier Wayne Odesnik, but would be too strong, taking the match 6-3, 7-6 in 1 hour and 20 minutes. Isner’s second round opponent will be world No.208 Austin Krajicek, who held off Tim Smyczek in their first round match. 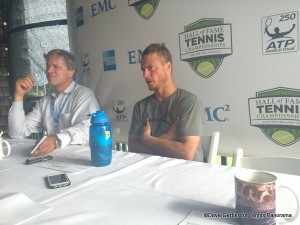 While big-servers Isner and Mahut would have relatively comfortable wins, the match-up between Lleyton Hewitt and world No.144 Ryan Harrison would turn out to be a much more even and entertaining one.

22-year-old Harrison opened strongly, breaking twice in the first set for 6-1. “I was trying to play a bit too clean tennis,” said Hewitt post-match, “and sort of just over-hitting the first set and I just lost my rhythm a little bit. After the first couple of games, Ryan played a lot better as well. He hit his spots on his serve, hit his forehand a lot better.”

In the second set, Hewitt appeared to be experiencing shoulder pain, but after treatment during a medical timeout, was able to stay in touch with Harrison and eventually take the set 7-5. “So at the start of the second set, I was really just trying to hang with him more than anything, and make him play a lot of balls.” 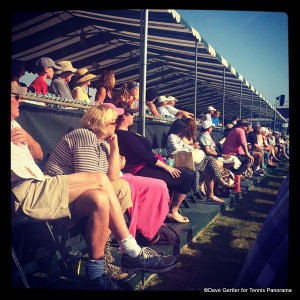 By the start of set three, it was clear to the Newport crowd that they were being treated to an exceptionally high-quality grass tennis match, and were showing their appreciation to the Australian as much as their local prospect. “Considering I was playing an American, it seemed like a lot of them were going for me, which is nice,” said Hewitt, who has reached the final in Newport the last two years, “I guess they appreciate me coming back as well, after losing in two finals as well.”

The final set included a total of five breaks of serve, Hewitt ultimately the victor 6-4. After being on court for 2 hours and 10 minutes, Hewitt said of his gritty win, “I just tried to win ugly more than anything, and just get balls back in play.”

Harrison, who is unfortunately known for drawing tough first-round opponents in big tournaments, was unable to contain his emotion at one point, breaking his racquet on the grass, and receiving a code violation. Said Hewitt of his up-and-coming opponent, “I think he’s just frustrated because he’s a lot better player than where his ranking’s at at the moment, and he’s probably been in this situation where he’s had opportunities to beat better players and hasn’t been able to close it out. I knew that going into the match and that’s why in the end, I just tried to hang with him, hang with him and then hopefully put some pressure and some doubt into his mind.”

Hewitt’s will take the court against his round 2 opponent, Croatia’s Ante Pavic, on Center Court, Wednesday.