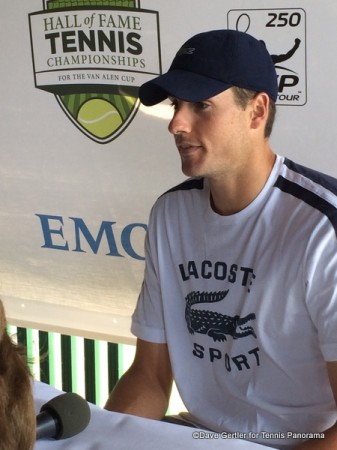 The only minor upset of the day was Israel’s Dudi Sela ousting his higher-ranked opponent, No .8 seed Adrian Mannarino, in straight sets. Sela had a strong serving day, winning 82% of points on his first serve and converting five of six break points against the Frenchman. Sela, one of the shorter players on tour, will now face the tallest, Ivo Karlovic, whose 18 aces was too much for serve-and-volleyer Sergiy Stakhovsky to handle, the Croatian winning 7-5, 7-6.

The tournament’s top four seeds also won through to the quarterfinals in straight sets. Defending champion Nicolas Mahut beat Australia’s Luke Saville in an hour, 10 minutes, out-serving the 20-year-old Australian qualifier, breaking him on four occasions. “It was a tough match,” said Mahut, “He’s a good player on grass. This kind of surface you have to be really focused on your serve and take the opportunity. It was much better than yesterday and I hope tomorrow will be even better.”

His serving will need to stay solid in his quarterfinal match against Australian Sam Groth, who although still outside the top 100, is one win away from reaching that milestone after another solid serving performance saw him through his match against Malek Jaziri. Groth’s ace count against the Tunisian was remarkably high at 24, ominous for his next opponent, who said, “He’s serving huge, he’s a very, very powerful player. So if I had to play against him I will have to be really concentrate on my serve, and then wait for something, maybe a double fault once, try a good return and waiting for the small opportunities I will have. But the first thing is to keep my serve, I’ll be really focused on that.”

Tournament top dog John Isner required less time and less aces against fellow American Austin Krajicek, defeating him on Center Court 6-3, 6-3 in just over an hour. “It was a pretty clean match,” said Isner, “I guess I got up early in both sets, and for me, that helps so much. I feel like I play pretty well when I’m playing ahead, especially on this surface too. It was a good match, very happy with it.”

Isner’s quarterfinal opponent was decided in a match between Rajeev Ram and Jack Sock, 21-year-old Sock coming through on top. Sock and Isner, both good friends, are looking forward to the quarterfinal. “He and I practice a lot and have become pretty good friends,” said Sock of Isner, “We obviously know each other pretty well now. We both know each other’s games pretty well so it should be whoever can execute better, I guess.”

Sock, fresh from winning his second grand slam – a Wimbledon doubles title with Vasek Pospisil, defeating the Bryan brothers in the final – is enjoying the burst of confidence he’s received into his singles game. “No matter what tournament it is, even doubles,” said Sock, “Whenever you win a match, it can only help, and especially the slams. I think that when you can get that run going into to second week of any slam, singles or doubles, and then you end up, like we were, fortunate enough to play on the weekend, second week of a slam, there’s only a few guys left in the locker room. It’s pretty cool, it’s a pretty special feeling. And to be able to be there and then go out on Center Court and play, and be lucky enough to win against the best team, probably, of all time in doubles, it can only help your confidence.”

Isner, who has not lost to Sock in four matches, seemed positive about Sock’s future in the game ahead of their first meeting on grass. “We’re both gonna want to win,” said Isner, “We’re good friends; we may even go out to dinner tonight, or even tomorrow night. I’ve gotten especially close to him now that he’s moved to Tampa. We train together, we use the same strength coach, we’re always training together. He’s a good friend of mine and someone who – I think, in a sense, he might look up a little bit to me. I’m certainly much older than him but he’s – in my opinion – got an incredibly bright future. He’s got a lot of weapons in his game, especially with that forehand of his, which is world class. So, he’s only gonna get better.”

The winner of Isner/Sock will face – in the semifinal – the winner between Lleyton Hewitt and Steve Johnson, who both graduated comfortably past their round-of-16 opponents, Ante Pavic and Tatsuma Ito, respectively. While Hewitt and Johnson won’t contest their quarterfinal tomorrow, the 33-year-old Aussie won’t be resting entirely. He’s one of five Australians remaining in the doubles draw at the quarterfinal stage. After his match with Pavic, Hewitt revealed, “I only play doubles most of the time to play with guys that I’m going to play Davis Cup for Australia with. That’s the only real reason that I play doubles. We’ve got a Davis Cup tie later in the year and Chris Guccione and I will most probably be playing doubles there, so it’s good to get some more matches.”