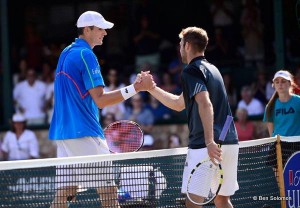 (July 11, 2014) NEWPORT – The second set of singles quarterfinals were played at the Hall of Fame Tennis Championships on Friday in Newport, which will celebrate its 60th year by adding a new name to its list of champions. After Nicolas Mahut was taken out by Sam Groth in the first of yesterday’s quarterfinals, by the time the last quarterfinal was played, the only former  champion left in the draw was also eliminated from the tournament.

By beating American No.1 John Isner, promising young talent Jack Sock has made his first ever ATP tour semifinal, where he will face Australia’s Lleyton Hewitt, who is looking to add to his tally of 29 career ATP titles. “He wasn’t on his A-game today,” said Sock of isner, “I was able to just scrap out a few returns, and lucky enough to get through.”

Earlier in the day, top-ranked Australian Lleyton Hewitt had a comfortable win over America’s Steve Johnson, beating him 6-4, 6-4 by playing solid tennis throughout. Johnson’s game was explosive at times, but he conceded points at crucial moments through unforced errors, and despite leading 3-1 in the second set, wasn’t able to win another game until serving to stay in the match at 3-5.

Hewitt is very comfortable on grass – of his 29 career titles, a healthy seven of them have been on this surface. After having made the final at Newport the last two years, the scene is set for Hewitt to perhaps go for third time lucky, as his family, who have been in Newport all week, would like to see. They wouldn’t be his only supporters in the crowd; Hewitt’s dynamic style of play and passionate displays of emotion on court have won the Rhode Island crowd’s support over the years.

“I still feel like I’m one of the fitter guys out there on the tour, no matter that I am over 30,” said Hewitt, after his singles quarterfinal and before playing his doubles semifinal later in the day, which he won with Australian partner Chris Guccione. “I’ve always done the right things, but it’s probably more important now to always do the right things after every match and prepare properly for the next match.”

He will need to be at the top of his physical game to beat 21-year-old Sock, who answered to the media as he iced his elbow ‘preventatively’. “Obviously, I’ll be playing a legend that’s still out there playing,” said Sock, “For him, it’s pretty unbelievable that he was No.1 that many years ago and still playing, still playing at a high level, so it’ll be tough.”

Before Hewitt and Sock take the court, the other semifinal will be contested between two of the game’s biggest men, and, biggest servers. Combining with Lleyton Hewitt, Sam Groth completes the first pair of Australians to reach a semifinal at the Hall of Fame Tennis Championship since Jason Stoltenberg and Wayne Arthurs did it way back in 2000. Both Groth and Hewitt will be hoping to go one better than their predecessors, who both lost their separate semifinal matches. The only other occasion where there have been a pair of Australians in Newport singles semifinals was in 1988 (Brad Drewett, Wally Masur).

“Tomorrow’s more about Sam holding his nerve in the semifinal,” said Hewitt, who has played Groth’s semifinal opponent Ivo Karlovic five times, only beating him once. Like Jack Sock, 26-year-old Sam Groth will be playing his first ATP-level semifinal when he takes the court against the 6’11” Croatian tomorrow. All four players are competing for prize money drawn from the tournament’s total financial commitment of $539,730.