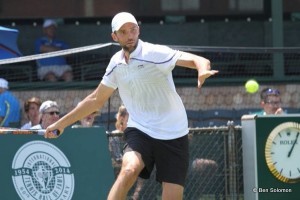 (July 12, 2014) NEWPORT – Lleyton Hewitt has not yet had to face one of the big-serving grass-courters that marked out the draw, but on Sunday, that’s set to change, as his opponent in the Hall of Fame Tennis Championship final, Ivo Karlovic, awaits.

Karlovic, who stands at 6’11”, has made it to the Newport final without dropping a single set the whole tournament, and while Hewitt has only dropped one – his first of the tournament against Ryan Harrison on Tuesday – he can’t rely on his own serve in the way his opponent in the final will be able to.

Karlovic led the tournament ace count with 44, going into his semifinal match against Australian Sam Groth, who was coming in second at 42, and he would add 9 more to that count during a match in which he broke Groth once in each set, winning it 6-4, 6-4 – the first time this tournament Karlovic has played a match without a tie-break. The match was predictably chess-like; “Wasn’t a lot of rallies out there,” said Groth after the match, “You’re not gonna get many chances on his serve. He came up with a couple of winners to break me in the first set and then all of a sudden the pressure’s back on me.” 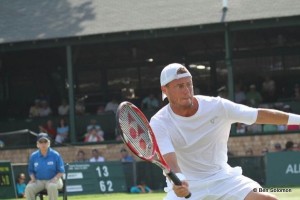 After 21-year-old American Jack Sock’s upset victory over compatriot and No.1 seed John Isner in yesterday’s quarterfinal, 33-year-old Hewitt proved a much tougher challenge for Sock, who was broken four times by Hewitt, eventually going down 6-1, 6-2. “I felt like his biggest weapon was obviously his first serve and his forehand,” said Hewitt, “And I was able to nullify those right from the start. Then he was sort of searching for answers. He was trying to go out of his comfort zone to try and change up and win points other ways, which I felt was playing into my hands.”

This will be the 33-year-old Australian’s third consecutive final at the Hall of Fame Tennis Championship, and while 35-year-old Karlovic has never been to a final in Newport, Rhode Island, he has now reached four finals on grass, and has won two. Hewitt, on the other hand, won 7 consecutive finals on grass, stretching back to 2000 where he beat Pete Sampras at Queen’s Club, all the way to 2010 when he beat Roger Federer in Halle.

When Hewitt walks onto Center Court at Newport on Sunday – the younger of the two oldest finalists there ever – he takes into the match a losing 1-4 record, the only win coming on clay in 2009.

While Karlovic’s confidence, focus and potency on serve seems to have grown throughout the tournament, Newport’s spectators at the Hall of Fame have been given daily reminders as to why the former world No. 1’s style of play still gives him a chance to take out his 30th ATP title on Sunday, even against an in-form Karlovic, but as Hewitt said of his preparation for the final, “There’s not a lot I can do until I get out there and play. I’m not gonna find 7-foot guys to come and serve at me.”

Hewitt will also be contesting the doubles final on Sunday with Davis Cup partner Chris Guccione. The last player to win both singles and doubles titles at an ATP tournament was last year’s Hall of Fame champion, Nicolas Mahut.