You are here: Home / Contributors / The Newport Club 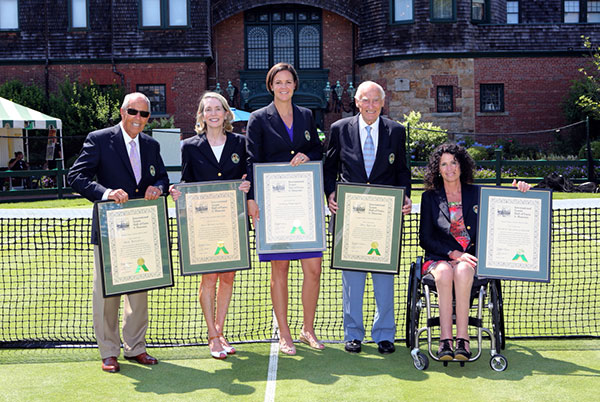 The Newport Club
By Jack Cunniff
(July 12, 2014) NEWPORT – With apologies to the late John Hughes.
Five students of the game of tennis – “executive” Jane Brown Grimes, “journalist” John Barrett, “survivor” Chantal Vandierendonck, “coach” Nick Bollettieri, and “champion” Lindsay Davenport – all come from different backgrounds. On Saturday, they reported for Saturday “detention” at the International Tennis Hall of Fame in Newport, RI. At the end of day, by sharing their life experiences, we learn that they aren’t just the executive, the journalist, the survivor, the coach, the champion. We see them for what they are: tennis fans. They are “The Newport Club”, Class of 2014.

To look at the resume of Jane Brown Grimes, she’s the consummate tennis executive. President and CEO of the International Tennis Hall of Fame. Managing Director of the Women’s Professional Tennis Council (now known as the Women’s Tennis Association). Chairman of the Board of the United States Tennis Association. Professional tennis has always had a fragmented political structure, and it is never easy to get each body to agree on the issues facing the sport. It was Brown Grimes’ love of tennis that allowed her to succeed in each of these roles by moving the sport forward. In her own words, “If you can kind of get on the same page with various groups, really convince them something you think should happen is good for the game overall, if you can back your own ego out of it, I think you can get a lot done.”
It’s easy to label Barrett a journalist. For over forty years, he was the tennis correspondent for The Financial Times of London. He was editor of World of Tennis, and publisher of Wimbledon the Official History. He was the Wimbledon announcer on the BBC from 1971 until 2006. More than this, however, he is a fan of tennis and feels incredibly lucky to have made his life in the sport. Regarding his broadcasting career, Barrett says “I had the best seat in the house. I could comment about the game I loved from an early age and they actually paid me for it! What could be more wonderful than that?” He married tennis as well, taking three-time Grand Slam champion Angela Mortimer as his bride in 1967.

Vandierendonck was born into a tennis family. At age 18, tennis took a back seat when she became a paraplegic as the result of an auto accident. Chantal would have to learn to accept life in a wheelchair. How could she survive life without tennis? Her uncle told Chantal about wheelchair tennis. Upon seeing the sport for the first time in Paris, she saw it was “still real tennis”. Her family organized wheelchair events in her native Netherlands, and with her love of practice and hard work, Vandierendonck soon became a champion in the sport. Because of her dedication to tennis, Vandierendonck learned how great her life in a wheelchair could be. She’s not only the first women’s wheelchair player inducted into the Tennis Hall of Fame, but also the first Dutch player inducted.

The “Coach”, Nick Bollettieri, is famous for many reasons. He has a number of successful former pupils, including Hall-of-Famers Andre Agassi, Jim Courier, and Monica Seles. He partnered with Arthur Ashe to start the Ashe Bollettieri Tennis Program in Newark, NJ, then started the Bollettieri Tennis Academy in Bradenton, FL. He’s the author of several instructional books. His commitment to tennis continues to drive him. His sponsorship for children’s tennis programs is well-documented, but in Newport, Bollettieri partnered with AARP Rhode Island to hold a free clinic for senior players. As he announced in his induction speech, “I’m just beginning my journey.” This fan of tennis says that retirement is not in his vocabulary.

Lindsay Davenport has always been known as a champion. She won regularly in the junior ranks of tennis. Within four months of turning professional, she won her first of 55 tournament titles. After turning twenty, she claimed the gold medal in the 1996 Atlanta Olympics. And she continued to win on the biggest stages of the sport, taking the Women’s Singles trophies at the 1998 U.S. Open, 1999 Wimbledon, and 2000 Australian Open. It’s been only recently that we’ve come to view Davenport as something other than a champion. Certainly, as the wife and mother of four, she has new responsibilities today. Yet her love of the sport has returned her to the scene as a respected tennis commentator. “I always loved to study the game,” Davenport admitted, “I would spend a lot of time trying to analyze the strengths and weaknesses of the players at the very top. I’m a tennis junkie.”

The five most recent inductees had been labeled and stereotyped into a role. But after the 2014 Tennis Hall of Fame induction ceremonies, we learned that the reason for their success was that they were, and still are, tennis fans.