You are here: Home / Features / Third Final is the Charm for Lleyton Hewitt in Newport 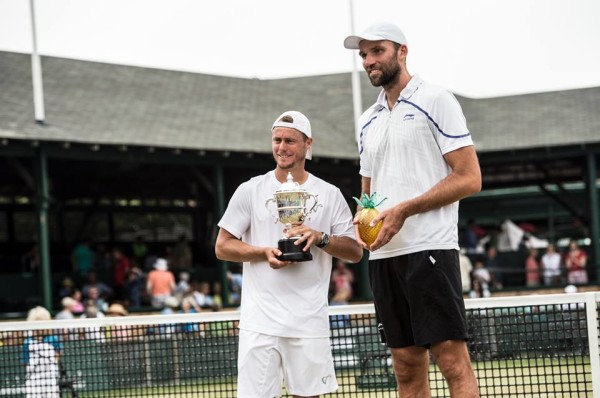 The final was a tight affair, with Karlovic’s potent serve-volleying a close match-up with Hewitt’s counter-attacking and ability to return well and chase down shots that other players wouldn’t get to. “I think my passing shots and returns are probably as good as anyone’s out there,” said Hewitt after the match, “They are two massive strengths of my game, and, playing Ivo, who was always gonna serve-volley first and second serves, I knew I was gonna have to do that well.”

The match was also the longest of the tournament, at 2 hours and 30 minutes. Hewitt broke early in the first set, capitalizing on Karlovic’s low first-service percentage, and often making the return passing shot look easy. “My service games, I was just trying to play clean tennis as much as possible,” said Hewitt, who would not face a break point in the first set, closing it out with a second break for 6-3, “But obviously from the baseline I was able to adjust to the wind a fair bit better than him.”

Hewitt, having thrilled Newport over the last two years, had the firm support of the crowd going into his third consecutive final. During the second set, in which both players would be broken twice, Karlovic appealed to the crowd for support, singling out one person high in the stands and thanking them for cheering for him. “Even though I didn’t play my best,” said Karlovic, who would win the second set tie-break, taking the match to a deciding sert, “I was fighting, I was trying to turn it around and I was able to do that. I’m a little bit disappointed, but overall it was a good week.”

Hewitt faced three break points in the final set, but neither player would get the upper hand until the third-set tie-break, which Hewitt would seal, along with his second title of the year. Hewitt was battling the odds against Karlovic, having only won one of their five career matches, saying he felt, “Obviously relief. It’s an important tournament. It’s not a grand slam, by no means, but for me, I’ve come here the last three years and I’ve put myself on the line and come awfully close the last two years, so it was nice to get rewarded today.”

Hewitt was still to add to his achievements by taking the doubles title with Davis Cup partner Chris Guccione 7-5, 6-4 against Rajeev Ram and Jonathan Erlich. “First time I’ve been able to win singles and doubles at the same tournament. It was good to win with Gooch as well. We’ve never won a title together before. We’ve played so many matches in Davis Cup. It was a really important one for us to win and, yeah, pretty pumped about it.”

With the win, Hewitt will edge closer to the top 40. “On these grass courts, it’s not easy to turn up every time and play consistently and beat guys,” said Hewitt, “That’s probably something I’m more proud of – the way that I’ve been able to beat some of the best servers in the game, Isner and Karlovic, on these courts. So that still shows that I’m able to match it with the best guys on grass, obviously.”

For Karlovic, who now flies to Bogota as the defending champion of the Claro Open hard court ATP 250 event, the final appearance in Newport will take him inside the top 30 for the first time since April 2010.