You are here: Home / Contributors / Atlanta Starts to Heat Up with Querrey Upset 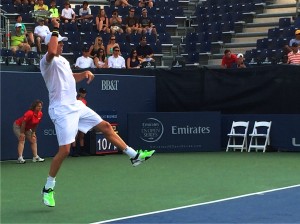 By Herman Wood
(July 23, 2014) ATLANTA – It was a typical Atlanta day at the BB&T Atlanta Open – hot and humid!
In first round action, Yen-Shun Lu out-held American Alex Kuznetsov 6-4, 6-4.  There were a total of fifteen break points in the match with four converted.
In doubles action, Chris Guccione partnered with fellow Brit John-Patrick Smith to get by Jonathan Erlich and Rajeev Ram 3-6, 6-3, 10-6.  They needed the ten point super tiebreak to wrap things after failing to take care of one of their service games in the opening set.
The tie break was a bit one-sided, as Guccione/Smith put pressure on their opponents’ serve.  Over on the grandstand, Nicholas Barrientos partnered with Victor Estella Burgos to narrowly squeeze by the Thai version of the Bryan brothers, identical twins Sanchai and Sonchat Ratiwatana, 6-7(2), 6-3, and 10-8 in the super tiebreak.  The chair had to overrule on a match point to continue the match.  One fan called it the worst line call in the history of tennis.  Perhaps the humidity got to the line judge and he needed to get to the shade.  Clearly, this match was a case of just one point making the difference.
Also on the grandstand court, Lukas Lacko took on Denis Istomin.  Istomin broke serve three times, but gave one of them back to get the first set 7-5.  Lacko returned the favor in the second set, breaking twice to close run the set in a 6-1 run away.  Both men struggled in deciding third set, but Lacko finally prevailed 6-4.  Wimbledon doubles champ, Vasek Pospisil, defeated Illya Marchenko of Ukraine, 7-5, 6-3, also on the grandstand court.
The hottest match of the day was qualifier Michael Venus versus Jack Sock.  Sock is well known for his big serve and ferocious forehand.  Sock said, “I’m always looking to them to dictate and play aggressive.”  That wasn’t the case in the first set, as he mainly took advantage of a few Venus errors and a high volley winner to earn the break in Venus’ second service game.  “I had to scrap out some return points and use my athleticism out there.”  Venus stayed right with him through the end of the set, forcing Sock to serve it out, 6-4.
In the second set, the big forehand served him very well, as he dictated play consistently with it.  Venus got a bit off track and gave Sock lots of help, as he converted two of the four break point opportunities.  Sock was also able to use variety in the second set, with a couple of forays to the net and even a lob volley.  “Definitely the variety, kind of different components of my game, keeps guys on their toes.  Definitely good for me.”  He closed the match out after a Venus hold, 6-4, 6-2.
When asked about his chances, the Wimbledon doubles champ said,  “Confidence is the highest its ever been in my career.”
The final match of the night featured Jack, rather, Dudi Sela and American Sam Querrey.  Sela has quite a bit of fame lately, though little success, against the biggest men on tour, with losses to Isner and most recently in Bogota to his good friend, Ivo Karlovic.

At the end of the Bogota match, he grabbed a chair to stand on to give his friend a congratulatory hug at the net.  Tonight, however, he was certainly Jack to Querrey’s giant, returning Querrey’s bombs and forcing him to rally.
Querrey’s serves were not as reliable, as he only got 53% in for the match.  Even winning nearly all of the points started with a first serve wasn’t enough when he only won 23% of his second deliveries!  Sela’s backhand dictated rallies on a consistent basis.  On any backhand to backhand rally, Querrey was at a distinct disadvantage.
#452577850 / gettyimages.com

Sela protected his serve very well, only facing two break points.  Querrey converted one of them, but immediately dug a hole in the very next game at love-40 and simply could not dig out.  The Atlanta fans got behind Querrey, whether given a reason to cheer or not, but Querrey simply was not on his best game,though he never failed to give his best effort.  Sela advanced 6-2, 6-4 and got a well deserved round of applause from the partisan fans, who clearly appreciated his fine play.
In Thursday’s feature matches, former Georgia Bulldog John Isner sees his first action, taking on another player with local ties, Robby Ginepri.  After that match, American Tim Smyczek plays Marinko Matosevic.  The Wimbledon doubles champs, Vasek Pospisil and Jack Sock, will try to get past Benjamin Becker and Frank Moser in doubles action on the grandstand.
Herman Wood is in Atlanta covering the BB&T Open action from around the grounds for Tennis Panorama News, follow him on twitter at https://twitter.com/hermanewood.