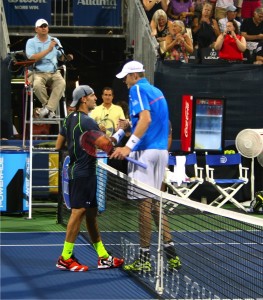 By Herman Wood
(July 24, 2014) ATLANTA – It was a showdown of Americans with local ties tonight at the BB&T Atlanta Open.  Former University of Georgia standout, top ranked American, and number one seed John Isner took on local Robby Ginepri, from just up I-75 in Marietta, now Kennesaw.  It was their fourth meeting, with Isner holding the edge, 2-1.
Ginepri, currently ranked 281, though as high as 15, was in the tournament as a wild card.  As expected in any John Isner match, things started with an ace.  Ginepri returned the favor with his very first serve and had a very easy hold.  From that point forward, it was evident that Ginepri was dialed in on the Isner serve.  He made Isner work by getting balls back in play off huge serves.  Isner did not help his own cause by only getting forty six percent of his first serves in and it led to the inevitable break with a sizzling passing shot by Ginepri to get him to 3-2.  Ginepri consolidated the break with a hold and the match stayed on track until Ginepri served the first set out 6-4.
As with any John Tiebreak, rather, Isner match, the second set went exactly that way.  There were threats of service break, again with Ginepri seeming to have really timed Isner’s deliveries.  It certainly seemed to take its toll, as Ginepri was flexing his wrists after blocking back 140 MPH or so blasts.  Isner served 71% of his first serves into play, converting 73% of those points.  Ginepri had no break points against his serve, while Isner saved the two opportunities Ginepri had.  There were mini-breaks of serve in the tie breaker, but the master of the breaker prevailed in a tight one 7-5.  Of course, the last point was an ace.
In the deciding third set, Ginepri seemed struggled a bit more to hold his serve, facing 7 break points.  He even dug out of one 15-40 hole and punctuated the hold with a yell.  It was inspired Ginepri tennis.  Isner had the customary two break points and saved both.  In Ginepri’s final service game, he was trying to hold for 6-5 and it couldn’t quite hold on.  The whole state knew what was coming next, but Ginepri was game, going for a new racquet in his attempt to break Isner’s  serve.  He never needed it.  Ace, ace, ace, ace.  Game, set, match; Isner 4-6, 7-5 (5), 7-5.  Isner said “It’s not easy, coming in playing your first match.  Having a bye is nice, but at the same time you are playing someone that has played a match.”  Isner will play Matsovci on Friday, surprisingly at 4 PM.  The feature 7 PM slot will see Jack Sock take on Lukas Lacko.
The crowd was well entertained and solidly behind good play, getting loud for each player in appreciation.  Of course, there was barking for Isner and shouts of ROBBY in support of Ginepri.  Some would have been concerned about turnout if Ginepri had won, but the crowd support for both men made it clear that Atlantans appreciation of good tennis should not be underestimated.