You are here: Home / Contributors / Isner to Meet Sela in Atlanta Open Final 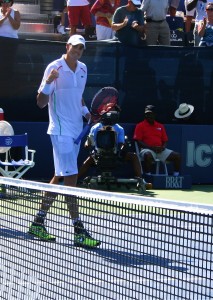 By Herman Wood
(July 26, 2014) ATLANTA – Young American Jack Sock took on veteran John Isner on Saturday at the BB&T Open in the first singles semifinal.  Hotlanta certainly was up to the nickname.  Conditions were compared to this year’s Australian Open, when players were understandably concerned.  The difference?  In Atlanta, the humidity combined with the heat makes it more difficult for the body to cool itself.  Despite the conditions, both men came out in dark colored tops.  Isner said, “It’s not easy conditions at all playing, doing anything.  Heat like that is tough.  I don’t know how the fans endure it.”  Despite conditions, Isner started off on the right foot, unlike yesterday.  He was striking winners off his forehand and backhand, though his first serve was off and he only had three aces for the first set while serving 48% on that delivery.  Sock looked better able to handle the conditions early in the match, moving better with his head up and working for points while Isner was content to let some balls go.  Isner has been accused of playing “possum” a bit in matches, but the two men train together, so that was not in the cards today.  (In the southeastern United States, possum refers to a marsupial whose primary method of defense is to play dead until an opportune moment, at which time they either wander off or show impressive teeth and a willingness to fight.)

As expected, rallies were mostly short, one or two strokes after a return.  The first deuce point occurred at four games apiece, with Isner serving.  On Isner’s very next service game, Sock seemed to fully get his teeth into Isner’s deliveries and forced him to rally.  With an untimely double fault, Isner handed Sock his first break point opportunity.  With a second serve coming, Sock got the return back into play and correctly anticipated Isner’s inside out forehand and just missed a pass off the tape that might have made all the difference and he clearly knew it.  Isner took full advantage and held with a blistering forehand and 128 MPH ace.  Serving at 5-6, perhaps Sock wasn’t able to clear the thoughts of the missed opportunity and missed his next three serves, the first two a double fault.  His fourth serve was punished by Isner for an easy winner.  Isner was certainly feeling it, as he challenged on the third point of the game on a ball that was solidly on the line.  The challenge may have given Sock some time to settle himself, as he took that point and the next two to get to 40-30.  Isner toughened and Sock got a bit loose.  Combined, that let to nine deuces before the matter of the twelfth game and ultimately the first set could be settled.  Sock chose the more difficult down the line forehand on a short ball and clipped the tape.  Isner sealed the first set on his third try with a Sock backhand error, 7-5, on a ball that did not seem that difficult.

Sock settled in despite early pressure from Isner in the first few games of the second set.  Certainly, he showed maturity beyond his young age, keeping his wits about him and continuing with good fight through two games all.  On Sock’s serve, at 2-3, Isner made a challenge on a ball called out right in front of Sock.  It turned out to be a wise challenge, as review showed the ball good.  The chair awarded the point to Isner.  Sock argued that the call by the linesman affected his play on the ball and that the point should be replayed.  It was very tough to tell when the call came, though it did appear that Sock had a play and chose not to play the ball and the linesman made the call late.  Sock struggled with himself throughout the game.  He told the chair umpire “You ruin matches, you know that.”  To his credit, Sock worked through the game and held to get to three all.

Perhaps the game energized Isner, as he showed no signs of playing possum or “lollygagging around” as he kept the pressure on Sock, with extremely high kicking second serves that Sock had lots of trouble returning mixed in with a few more aces on first serve deliveries.  On Sock’s service games, Isner was clearly trying to attack with frequent approaches and crushed forehands.  The strategy led to some impressive shots as well as shanks, one of which may have stopped traffic on nearby Interstate 75.  The crushed forehands from Isner looked to do damage to anything they hit.  Isner stepped up his serve to hold to get to 5-4.  The game went for three straight service winners, only to be interrupted by an Isner miss on the only ball Sock got in play in the whole game.  Isner closed the game with an ace.  Sock stepped in to serve, down 4-5, to stay in the match.  After more impressive shanks by Isner, Sock let a thirty love lead evaporate on a poor attempt at a slice back hand and floating forehand winner by Isner.  Isner stepped up again and committed to the rally and Sock missed to give Isner a match point.  Sock saved it with aggressive play, leading to an overhead to get back to deuce.  Unfortunately for Sock, he double faulted immediately to give Isner another match point.  Sock played bravely, nailing a ball onto the left baseline that Isner challenged unsuccessfully.  If out, it would have ended the match.  Sock could not manage to rally on the subsequent deuce, missing a forehand to give Isner a match point. Sock finally donated a double fault to hand the match to Isner, 7-5, 6-4.  He will either face Dudi Sela or Benjamin Becker in the finals on Sunday.

When asked about his possible opponent on Sunday, Isner expressed no preference.  He mentioned that “They said on TV I was 2-0 against Becker, though I can’t remember the two times I’ve played him.  He’s another college product.  He went four years at Baylor.  That would be kind of cool, two four year college guys.  Dudi, I remember I played him in Delray Beach this year.  I beat him 7-6 in the third.  Although he is slight of stature, he doesn’t mind playing guys with big serves.  He beat Querrey.  He beat Pospisil.  He’s just an extremely talented player that can do so much with the ball.  I don’t know who to favor.”

Before an appreciative packed house at Atlantic Station in Atlanta, Israeli Dudi Sela took on German Benjamin Becker over three tough sets for a chance to play local favorite John Isner  With the first two sets virtual mirror images, with each man winning a set 6-3, the match came down to a tight third set.  With Becker giving him only one opportunity to break, Sela took full advantage to get to 4-2.  Becker had five opportunities to break at that time, but had not cashed in.    Both men could feel the pressure, but Becker stepped up with a forehand winner to finally break right back.  Sela was far from done, hitting his picture perfect backhand for winners at crucial times and breaking again to allow him to serve for the final, 5-3.  Sela went for his shots and earned his first match point with a nice forehand retrieve that Becker shanked.  On the very first match point, Sela seized the opportunity with a blistering forehand that was too much for Becker.  It will be only his second final.  He has experience playing big servers like Isner.  He eliminated Pospisil and Querrey earlier in the Atlanta tournament.  In Columbia, he played Ivo Karlovic and used a chair to shake his hand after the match.
Sela really appreciated the support.  “This atmosphere is great!  I love Atlanta.”  Somehow, even with a well educated Atlanta tennis crowd, I expect former Georgia Bulldog John Isner will be feeling a bit more love.  The last time they played, it took Isner a third set tiebreak to overcome Sela.  The local support may be all the edge Isner needs.