(July 29, 2014) WASHINGTON, DC – It’s still only the first round, but the Citi Open women’s draw is now without a defending champion or a No. 1 seed.
Top seed at the Washington, D.C. event, Lucie Safarova, has been eliminated in the first round by French world No. 78 Kristina Mladenovic.  This upset came off the back of a straightforward win by No.2 seed Ekaterina Makarova over Magdalena Rybarikova, albeit not an upset other than the fact that the Rybarikova had never lost a match at the event, include her match against Makarova at last year’s Citi Open.

While Makarova’s was a straightforward 6-1, 6-1 win in under an hour, Mladenovic needed two hours, five minutes and three sets to topple world No.17. Broken twice in the first set, Mladenovic would turn the match around in the second set, breaking at 4-3 on a Safarova double fault, from which point, she held and continued to pour pressure on the Czech veteran, breaking her once at 2-2, and again at 5-3, when she converted a match point brought about by three consecutive errors from the Czech 27-year-old.

It will be a second-round battle of the young guns when 21-year-old Mladenovic faces 18-year-old American qualifier Taylor Townsend who won through her first-round battle in three sets against Julia Goerges. Makarova is now the top seed remaining in the WTA draw. 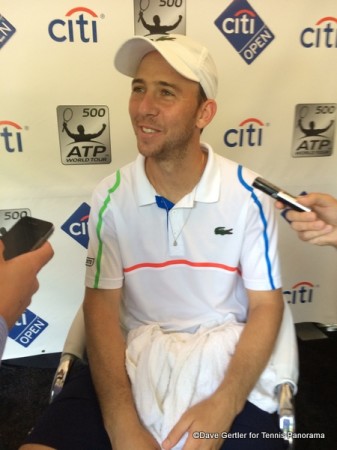 On the ATP side, Dudi Sela’s run of form since Wimbledon continued in a tight 7-6, 3-6, 6-4 win against Australian Sam Groth, which lasted exactly two hours. Sela managed to get a read on Groth’s serve – one of the biggest in the game – in time to take control of a tight first-set tie break. Groth’s reaction to losing the first set – smashing a racquet to smithereens and receiving a code violation – would normally indicate a mental breakdown, but in fact Groth was spurred on to breaks in the first and last games of the second set, which he won 6-3.

By the decider, Sela had regained the confidence that has seen him go 8 wins to 3 losses since Wimbledon, and although Groth would recover one of them, Sela’s two breaks of serve allowed him to take the final set 6-4. “He has a very big serve,” said Sela of Groth, “But he’s serving-volleying so I have more target on the returns, so it was a little bit easier for me. He played some great games, some terrible games, and these terrible games that he played, I took my chance and broke him.”

It was a successful day for American men, with Sam Querrey and Steve Johnson getting through their first-round matches in straight sets.

Dave Gertler is a tennis journalist, player and musician based in Sydney covering Citi Open for Tennis Panorama News. Follow his Twitter updates from the tournament @TennisNewsTPN, follow him on his personal Twitter @davegertler,  read his blog,  and listen to his podcast, Tennis Days .