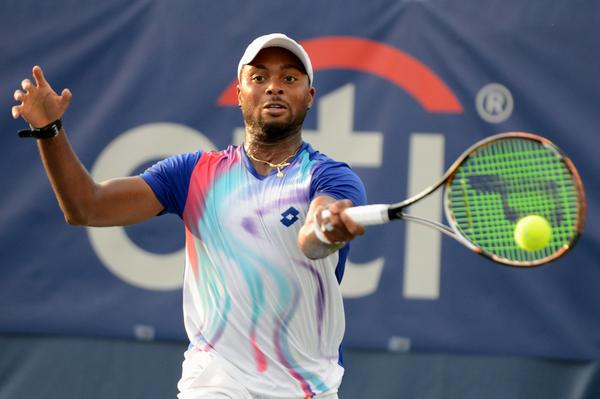 By Dave Gertler
(July 31, 2014) WASHINGTON, DC – Donald Young has bounced back from a four-match losing streak to find redemption at the Citi Open this week, where today’s win over Denis Istomin places him in his second ATP quarterfinal of 2014.
“I had to fight some nerves, and it’s tough to play an opponent who you can visually see was not on top of his game,” said Young of Istomin who appeared exhausted at times throughout the match, “I asked him at the end. He said he was a little tired.”
The 25-year-old American broke his opponent late in the first set, before consolidating the break – and the set – with a love service game, taking the opener 6-3.
Aforementioned losing streak aside, Young has found himself on a mid-career upswing in the last 12 months, and has raised his ranking from outside the top 150 to where it is now at No.73, mostly through wins at Challenger level.
Along with his second-round win against Julien Benneteau yesterday, today’s win against Istomin means Young now has an even 7-7 win/loss record against top-50 players in 2014, a sure sign he himself is heading in that direction.
“It’s been three years since I’ve been in the top 50,” said Young, “It took me a while to get my head together. Next time I get there – which I think I will – I want to stay and be consistent, at least for a good part of the rest of my career.”
Istomin swung the momentum in his favor in the second set, capitalizing on an early break and holding the advantage for 6-3, but with the Grandstand One crowd well and truly behind him, Young outlasted Istomin in the decider, proving more physically equipped than his opponent to gain the advantage in the majority of their long baseline duels.
Closing out the match, however, required a different approach. Young said his strategy on this crucial 5-3 service game was to, “Put some good first serves in, be aggressive, move forward. When I move forward, the nerves don’t have a chance to kick in, ‘cause it’s so instinctive.”
Now enjoying his sixth career appearance in Rock Creek Park, the 6-foot former junior world No.1 from Georgia is hoping to outdo his 2011 run to the Citi Open semi-final, but to reach that stage in 2014, he’ll need to turn the tables on his next opponent, Kevin Anderson, who has beaten Young the last five times they’ve played.
It was a good day for American men at the Citi Open, with Young, as well as Steve Johnson getting through to the quarter-finals, Johnson taking out 9th seed Ivo Karlovic in three sets and two hours.