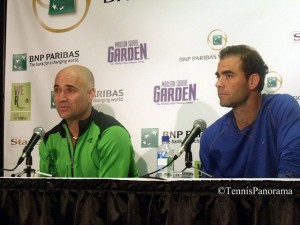 The full 2015 PowerShares Series schedule with event match-ups are as follows:

In 2014, McEnroe won the points title for the first time in the nine-year
history of Champions Series tennis by winning events in Kansas City,
Indianapolis, Nashville and Charlotte. McEnroe was followed in the points
standings by Blake in second place and Roddick in third place.