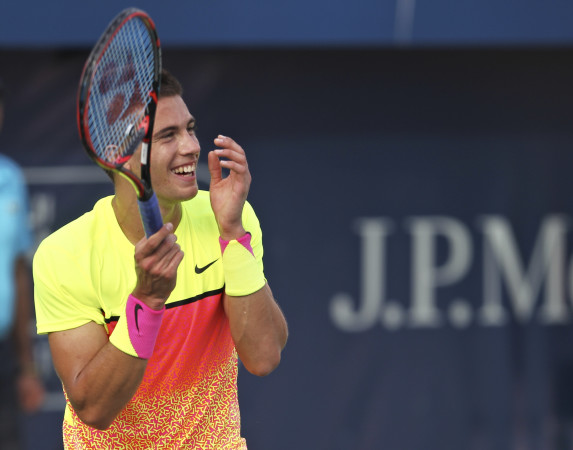 The 18-year-old was beaten in the qualifying rounds, but received a place in the main draw when 2014 semifinalist Philipp Kohlschreiber withdrew due to illness.

“I was just trying to maintain the level and stay in the rally as long as I can, which I was doing really good, you know. I was also running very good,” said Coric currently ranked No. 84.

“I think I was really lucky with Kohlschreiber pulling out. That’s the life. Sometimes you’re going to get lucky. Maybe next tournament I will have match point and I’m not going to take it. That’s tennis. One week you gonna play good, you gonna be lucky, and it’s those kind of days for you to take opportunities.”

Last year Coric stunned Rafael Nadal in Basel, and caught the eye of Novak Djokovic, who has since practised with him both in Australia and Dubai.

“I try to help him because I see, in a way, myself through him,” said Djokovic. “I’ve never felt that way when I practice with somebody as I felt with him. It’s like playing myself. Very similar game. Great fighting spirit, disciplined, focused, committed, confident, very young but confident, which is important.”

“He didn’t make many errors,” said Murray. “He played very solid and he moved well, made a lot of balls, made it tough. I made way too many mistakes from the beginning of the match right through to the end, early in rallies, rushing points. I don’t think I’m being wrong in saying that I made a lot of basic errors, especially early in the rallies. I don’t know exactly why that was the case.”

Murray made 55 errors with only 15 winners.

“He lacks a little bit of experience and confidence on being in the big stadium. That’s where I used my opportunity from the start,” said Djokovic. “I made double break, and I felt like I was in control of the match. I didn’t allow him to get into the groove. So it was a good performance.”

Roger Federer was on court for only 20 minutes as Richard Gasquet retired with a back injury after losing the first set 6-1.

“I think I played well. I served well,” he said. “Then again, you know, the test was so short that it’s tough to judge on a 20-minute match. But I think I was hitting the ball well again like yesterday. I felt able to play aggressive and do what I was hoping to do, so I was very pleased, actually.”

“I think especially in the second set, end of the second set, he come up with some great shots,” said Berdych. “But that’s how it is. You know, you have to know how to deal with those situations. Again, it’s very good that I handled the third set how I did, two breaks.”