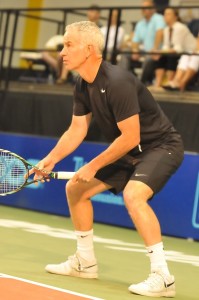 (Feb. 26, 2015) NEW HAVEN, Conn. – John McEnroe, James Blake, Andy Roddick, and Jim Courier, four of the best American tennis players of all time, will compete in the Legends Event at the 2015 Connecticut Open, to be held August 21-29, at the Connecticut Tennis Center at Yale, it was announced today by Anne Worcester, tournament director.
For the second year, the tournament will bring together some of the game’s most well-known and talented legends for two entertaining evenings of tennis. On Thursday, August 27, Blake will play Roddick, and on Friday, August 28, McEnroe will battle Courier. Both matches will be the second match of the evening session, following the WTA quarterfinal and semifinal match, respectively. The Legends match will be best of three sets, with a super tiebreak for the third set.
McEnroe, a seven-time Grand Slam singles and nine-time Grand Slam doubles Champion, will be returning to New Haven for the first time since 1992. One of the most talented players in history, he accumulated more than 150 singles and doubles championships in his career, and in 1984, had one of the greatest seasons in the history of tennis winning two majors (Wimbledon, US Open), 13 of 15 singles tournaments, and compiled an 82-3 record for the year, which still stands as the best year-long winning percentage on the ATP World Tour. McEnroe was inducted into the International Tennis Hall of Fame in 1999.
“I look forward to competing against Jim Courier in New Haven later this year.  Both Jim and I will be prepared to give our very best to make sure the fans get their money’s worth.  New Haven has a rich tennis history so it will be good to be a part of the Connecticut Open.”
Blake, a two-time Connecticut Open Champion with 10 singles tournaments and seven doubles titles to his name, Roddick, a former World No. 1 player and US Open Champion, and Courier, a former World No. 1 and four-time Grand Slam Champion, entertained the crowds over two nights in 2014, and the event drew rave reviews from fans.
“Our 2014 Legends Event was a huge success for the Connecticut Open, and we are expecting the 2015 event to be even better this year with the addition of legendary John McEnroe,” said Worcester. “James Blake, Andy Roddick and Jim Courier will again showcase how mixing humor, fun and great tennis can create a dynamic evening that enhances the overall fan experience at the tournament.”