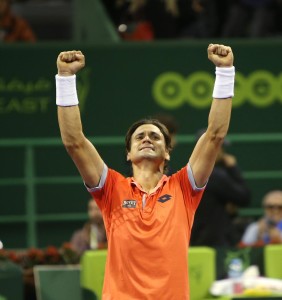 Ferrer won an ATP best third tournament this year with the title and lifted his record to 18-1 with the 6-3, 7-5 win over top seed Kei Nishikori. For the 32-year-old Spaniard, it was his fourth title in Acapulco and his 24th career ATP crown. He won the previous three Acapulco titles on clay, this year’s event was played on hardcourt.

“Tonight I played my best match this week,” said Ferrer. I played very aggressive, without mistakes. I’m very happy. To win here a fourth time is a dream.

“I tried to play my forehand to his forehand and with more energy. In important moments, he made more mistakes and I took my chances. I feel very confident with my tennis now. I’ve won three tournaments this year and we’ve only began the season.”

“There were too many unforced errors,” said Nishikori. I tried to be aggressive but I was missing too much. Especially with this slower surface, he gets everything. I knew I had to step in a little more, but it wasn’t my day.

“I fought hard from 0-3 (in the second set) and tried to come back, but he was too good. It was definitely a great week, I had some tough matches and it’s always a great feeling coming through to a final.”

Just six days ago he captured the title in Rio de Janeiro and in January won the crown in Doha. The world No. 9 took home $343,000 in prize money.

Despite the loss, Nishikori, will reach career-high World No. 4 ranking on Monday.

Almost out of tennis, fifth seeded Timea Bacsinszky of Switzerland won her second WTA Tour title, beating third seed Caroline Garcia of France 6-3, 6-0. Dealing with multiple injuries from 2011-2013, she fell as low as 578 in the world. She said that she almost stopped playing the sport in 2013.

“I almost stopped playing in 2013,” said the Swiss. “When I decided to play again, at the French Open in 2013, I got a new team around me – a new coach, new fitness coach, I’ve been working a lot with Swiss tennis. The road was long, and it’ll still be long, but I’ve been working hard. I wasn’t just expecting the results to come right away, I was patient. I knew I needed time to build everything up. I’m really proud. And knowing what I’ve been through, I’m even prouder.”