You are here: Home / Contributors / Bryan Brothers Keep Hope Alive for US with Five-set Win in Davis Cup 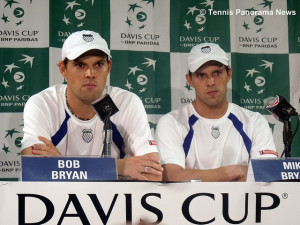 (March 7, 2015) GLASGOW, SCOTLAND – If you had asked anyone at the start of the day whether they would expect to be on the edge of their seats once more in Glasgow, you would have been hard pushed to find anyone to agree with you.

For team USA, the Bryan brothers came to play and they ripped through the first two sets in less than an hour, and even had match points to end it all in the fourth set, but somehow the Brits found a way to hang on.

It was not the easiest of comebacks for Jamie Murray, who got the nod to play along with the in-form Dominic Inglot who had already recorded two wins this season over the twins.

Finally holding his serve in the third set, it seemed to spur the Brits on to greater glories as the Bryan’s intensity dropped a little, while Dominic Inglot proved to be on fire at the net and Murray started to paint the lines with burning accuracy,

There was a hint of danger for the scratch pairing in front of an enthusiastic home crowd as the tall rangy Inglot found himself under pressure to hold his serve for the first time but dig himself out of a whole with some very solid serving as Murray dug deep to hold again to force a fourth set tie-breaker.

Two set points came and went for the Brits but they struggled to make it count, and a nifty Bryan poach suddenly brought up match point for the Americans. The threats seemed to come quick and fast for the Brits, and once more the risks paid off for the home team as they forced the decider.

It looked as though this match would be another long one, but at 7-7 a Murray volley found the net to give the Bryans a chance to serve it out, and they took it to set up a thrilling close.

Inglot just catching the edge of his racquet to a stinging return from the Bryan’s spelled danger as they took the mini-break for a 5-3 lead on their serve. A great stretch from Inglot pulled the Brits back on serve as the Brits clung on to bring up their first set point to force a decider. Inglot was poaching once more at the net to bring up their second set point but the pair could not find a way to close once more. A Bryan interception spun the advantage to the visitors, on their serve.

Inglot’s thundering return kept the Brits hanging in and Murray painting the lines brought up a third set point for the Brits, forcing the Americans into a decider.

Despite both Inglot and Murray requiring treatment during the decider, no quarter was being given now by either pairing as the fifth set wound its way on. With the threat of the first break points looming for the Americans on Murray’s serve at 7-7, a nicked edge saved the Brits albeit briefly and Murray’s missed half volley finding the net handing the Bryans a chance to serve for the match as they closed out the visitors’ first win.

They admitted how much it meant to get their first five set win in the Davis Cup, saying: “We lost a couple of heartbreakers in 2013 so if we got this opportunity again, we were actually telling each other let’s erase all that pain and this was a great way to do it, is to win an very emotional match, I thought we played a great match, those guys didn’t give us an inch all day. Jamie returned well and served well. They made a ton of first serves and cleaned up the volleys. We had to bring out best stuff to win.”

“We didn’t let up,” Mike Bryan chimed in. “They hit great returns. They were going for it the whole way. We had been playing well all week and we played a great match today and it came down to a few points. The margins were really small. We had a couple of looks in the fourth set. But, all credit to them. They hit some alley shots and lines and served big when they had to. It came down to the wire.”

“The biggest luxury is having these guys on the team,” said US Davis Cup Captain Jim Courier of the Bryan brothers. “They continue to come through for us.”

John Isner will face Andy Murray in the live fourth rubber in reverse singles on Sunday with Great Britain leading the tie 2-1.