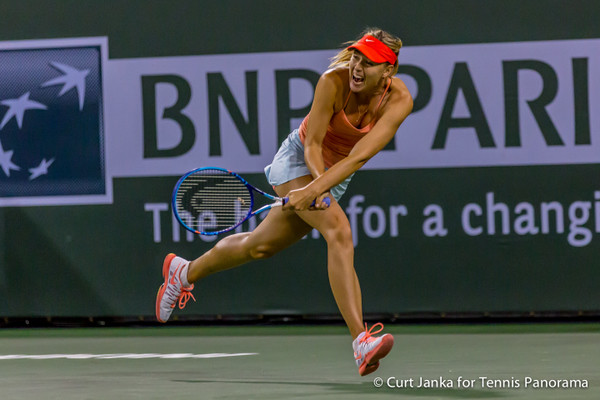 Pennetta left the court during the first set and cried.

“Sometimes you just need to take everything out,” said Pennetta. “I mean, in the court it’s not easy to do that. I was just trying to keep calm and playing every point.

“But then when I finish the first set I was feeling, Okay, I have to go out.”

“For the first two or three games I was OK,” Pennetta continued “Then it’s coming. Like I never expect. I never do something like that. Normally you go away and you don’t want to stay on the court. But for me was important to just keep calm and try to play. In the end I just play really well.”

“It was always really tough and close match. I think for sure, I mean, when you go on the court and you know you lose the last two times you think a little bit more.

“I just try to play in the way I always play against her. I mean, if you give her time you are dead, so you have to hit the ball, try to be aggressive the most you can, and try to go all the time for the good shot.”

I mean, it’s always the way I play, but sometimes when I play with not the big one I’m waiting a little bit more. But with this kind of player you have to take the chance you have, because it’s just coming once. If you wait, they are back.

Pennetta broke the world No 2’s serve twice in the deciding set.

“I don’t think the match starts in the third set,” said Sharapova. “I got off to a good start. Definitely had some chances in the beginning of the second set. Few Love‑40, Love‑30 games.

“Yeah, just didn’t, you know, commit enough. Didn’t take one of those. I think she gained a little bit of confidence after that. She started feeling a little bit kind of fresh breath of air. Started going a little bit more for her serve, for the lines.

“I just felt she got in a really good rhythm. Everything I gave her she was able to hit back solid with pace. She mixed it up. She was seeing the ball a lot better.”

“We haven’t played in a while so it’s tough to compare today’s match to the other ones,” noted the five-time major winner. “Today’s situation, I think it was ‑‑ when you let someone kind of back in, when you’re, you know, there in front of them and, you know, you’re doing the right things ‑‑ okay, maybe I wasn’t playing my best tennis in the first set, but I was competitive enough and solid enough and was doing the right things.

“Just wasn’t able to step up in the key moments in the second.”

Pennetta will play the winner of the Sabine Lisicki/Caroline Garcia match in the quarterfinals.