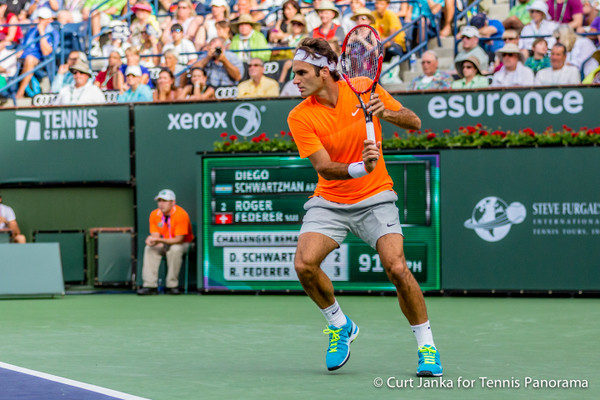 (March 17, 2015) World No. 2 and four-time Indian Wells champion Roger Federer avenged his Australian Open third round loss to Italy’s Andreas Seppi with a 6-3, 6-4 victory on Tuesday night. Rafael Nadal also advanced with a 6-4, 6-2 win over American Donald Young. Both men have moved on to the round of 16.

“It absolutely was an opportunity right away to play him again and sort of erase it to some extent from the memory as the season moves forward,” Federer said of the 82-minute match “It’s one of those matches you’re happy you’re through, and I was happy it was over.”

In the all-lefty match-up, Nadal said: “I feel confident that I am playing much better than one month and a half ago.”

The No 3 player will face Gilles Simon in the fourth round.

“He is playing well. He had a good beginning of the season,” The Spaniard said of his future French challenger. “Is true he had some problem in his neck last couple of years, no? He had some injuries there.

“So he’s playing with injuries, with pain, with no continuity is very difficult for everybody. He’s healthy now. He’s playing well. He’s a very dangerous player.”

“Never played him,” said Sock. “I mean, we are friendly. Friendly guy. Talk in the locker room some. Yeah, I’m more excited than anything if I do play him. Obviously Seppi got him in Melbourne.

“But, yeah, if I get a chance to play him ‑‑ I haven’t played one of those, as some people say, those top 4 guys. I haven’t been able to play one in a match. Yeah, I look forward to it, and especially here in the States it would be fun.”