You are here: Home / Contributors / Old Guard Shine Once More 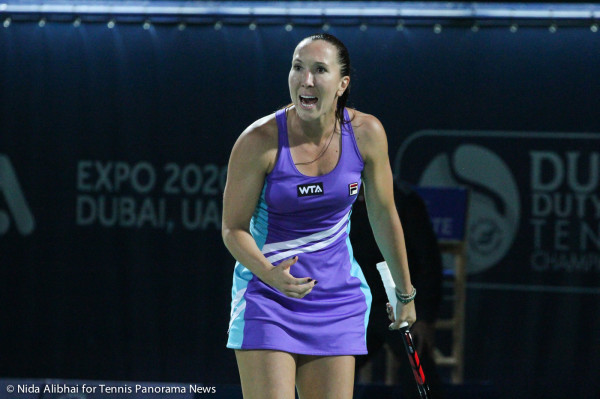 (March 19, 2015) INDIAN WELLS, CALIFORNIA – We could be heading for a Serena Williams / Jelena Jankovic final after the Serbian continued her strong run of form at the tournament she won back in 2010. Always reliable for a chuckle in press, she walked in with a heavy sigh as if she had lost, before joking about how she and Williams had been high-fiving each other at their achievements this week.

In a week where the WTA Rising Stars rose up for a fraction of a time to dispatch top seeds, the old guard have reasserted themselves, and we were almost entertaining three players over the age of 30 in the semi-finals.

Jankovic’s passage into the final was quick, as Ukrainian qualifier Lesia Tsurenko sadly struggled throughout their quarter-final with an ankle injury she picked up in the previous round, and retired to hand Jankovic a 6-1, 4-1 win.

“It’s never nice to end a match in that way. I think Lesia has had such a great tournament and she has beaten so many great players throughout the draw. I knew it was going to be a tough match today. In the first set I think we played well. I didn’t see some problems. I was feeling pretty good out there. I was playing my game and waiting for my chances to execute. I was solid.”

She continued: “In the second set she started limping and I saw that she had some problem. You know, that’s the time as well I lost a little bit of my focus. I was kind of looking at what she was doing. It was crucial for me to win that game at 2‑1, because who knows what would happen if it was 2‑All.”

Defending champion Flavia Pennetta was not so lucky though, starting slowly against Sabine Lisicki before finally starting to play a bit better. After her overwhelming emotions at beating World No. 2 Maria Sharapova, she had to battle once more from a set down to keep her defence alive, even saving a match point on the way to leveling the match.

The tides turned in the decider, as Pennetta had her chances to close out the match, but Lisicki, who had never won in Indian Wells, edged her for a place in the semi-final 6-4, 6-7 (3), 7-6 (4) . The crowds gathering for the night match were treated to a spectacle, and the semi-finals ought to live up to that as Serena Williams will face gritty Simona Halep in the final night match on Friday, with Jankovic and Lisicki opening up the show.

Meanwhile the men’s quarter-finals got underway with Andy Murray thwarting Feliciano Lopez. The Spaniard could not get a break (quite literally) as Murray quietly and efficiently dismantled his serve and rendered his coming forward moot winning 6-3, 6-4.

He explained: “I don’t have as much trouble with the lefties just because I grew up playing with one, and that’s obviously one of his biggest advantages. I thought I played a good match. Every time he came to net I made it very difficult for him. I passed very well, and that was important, because it meant that he spent more time at the back of the court.

“When we were in the baseline rallies, I felt like I was able to dictate a lot of those points. Passing shots were important today.”

With the disappointing news that Bernard Tomic had withdrawn officially with a back injury, but also troubled with a wisdom tooth, defending men’s champion Novak Djokovic gets a walkover into the semi-final, but after struggling against him last year, Murray believes he has a chance to redress the balance.

He said: “He’s played extremely well here in the past. You know, he will be totally fresh as well and ready for the semis, so it will be a tough one for me. But I feel like I played well this week, and, you know, if I can keep that level up and for a sustained period on Saturday, I’ll have a chance.”

The men’s quarter-finals conclude on Friday.