You are here: Home / Features / Novak Djokovic and Roger Federer to Clash in Indian Wells Final 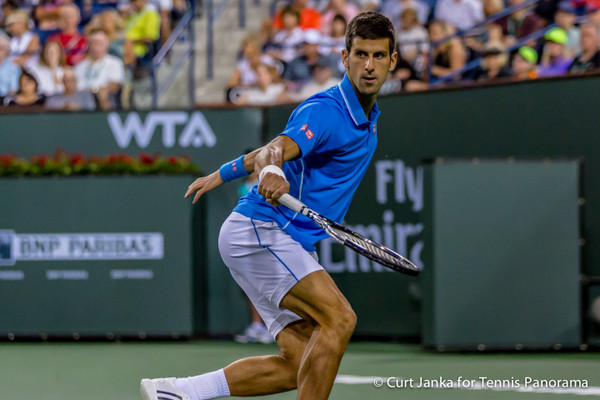 (March 21, 2015) The top two men’s tennis players will face off in the final of the BNP Paribas Open on Sunday in Indian Wells, California.

In Sunday’s final, defending champion Djokovic will be aiming to capture his fourth Indian Wells tournament, while Federer will be going for his fifth title in the desert. Federer leads Djokovic 20-17 in their head-to-head records.

Djokovic is now 17-8 against Murray, after winning for the sixth straight time against the Brit. Djokovic is 18- 2 on the year.

Considering this was probably the first match that I’ve played in the day in the entire year ‑‑ because I have played Doha, Dubai, Australian Open, and 90% of the matches I played during the night ‑‑ I thought I handled the conditions well.

It wasn’t easy, but I needed some time to adjust. The fact that I’m in another finals makes me definitely feel very good, very confident.

I had a phenomenal start of the season, and hopefully I can, you know, do my best tomorrow and maybe get another trophy.

Murray had a below average serving day against the Serb, losing his serve four times in the match.

“I tried to go for a few more serves today and to try to get a few more free points, but, you know, serving 50% or just below is, you know, not good enough against the best players,” sais Murray. “You obviously need to serve better.

“I thought I actually hit my second serve better than I did in Australia today, but first‑serve percentage was too low.”

“I think obviously I didn’t start either of the sets well,” Murray said. “That obviously makes things difficult against the best players. I mean, Novak didn’t give me any free points at the beginning of either of the sets, and I made a few too many errors early on.

“Then, you know, in the end of both sets, middle of both sets, I started to play a bit better and made it tougher and was able to push him a bit, but not enough at the beginning of the sets to make it challenging enough for him.”

“I thought I played solid, with the right intensity from the beginning,” said Djokovic. “Good first‑serve percentage. Got some free points there in the important moments.

“Just overall it was a good performance.”

Djokovic admitted that his opponent did preform as well as he could have.

“Even though it’s a straight‑set victory, I still had to earn it,” Djokovic stated. “I thought that he hasn’t played close to his highest level. Made a lot of unforced errors, especially from the forehand side. Low percentage of first serves in. That allowed me to obviously step in and be aggressive.” 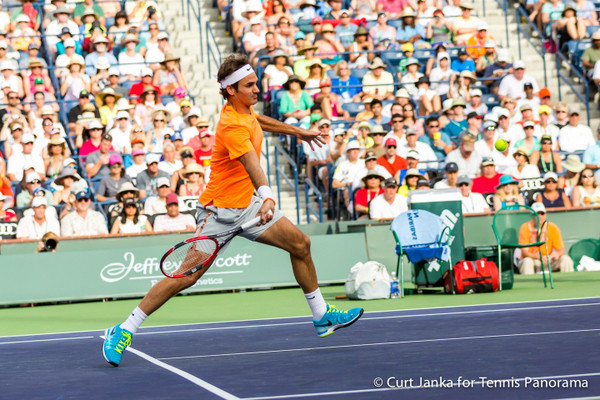 Milos Raonic broke up the potential “Big Four” reunion in the semifinals when he upset Rafael Nadal in the quarterfinals on Friday. Raonic tested Federer in the straight set loss on Saturday.

The hard-serving Canadian was broken in the eleventh game of the first set, which the Swiss closed out 7-5 in 45 minutes. Federer opened the second set with a break, and never looked back.

“He was neutralizing well on the serve, but especially during the points I felt like a few times I was able to stretch him,” Raonic said.

“He was doing a good job of getting legs behind and always playing deep cross so I could never find that short forehand I was looking for.”

“I wish I would have served a higher percentage, but I felt like when I was putting my first serve in I was doing a good job,” the Canadian explained. “I don’t think I mixed up my second serve enough.”

Djokovic discussed the possibility of playing Federer in the final:

“If I get to play Roger, it’s the ultimate final that right now I can have. Probably the player that is in the best form. You know, in the last 12 months he’s been playing some of his best tennis, I thought.

“Especially after, for his standards, pretty average season in 2013. He came back and played the finals in Wimbledon, played some great tournaments, won titles, and we had a fight for No. 1 spot all the way up to last couple of matches in London.

“He started off the year well again except that third‑round loss in the Australian Open. He won two titles. You know, he’s playing great. There no question about it.

“We all know that Roger, with all his records, we know the experience that he has. He’s not expected to play nothing less than his best in these stages of the tournament.

“He’s been proving that. He won so many titles. He loves the big occasions, and I’m sure he’s gonna come out wanting to win, being aggressive.

“He moves great. I thought since he changed the racquet it helped him with maybe reaching balls in the defense that he wasn’t able to do maybe before that. Seems like he has more control in the backhand. Great serve, as always.

“So he’s a very complete player. No question about it.”

“One thing about Roger is that he always makes you play highest level if you want to win against him,” Djokovic added.

“That’s something that’s always in the back of my mind. This is something that makes me come out with the highest possible concentration and intensity and commitment. If I want to win that match and win this title, I definitely need to be on top of my game.”

“After losing so close last year I was quite disappointed, even though I was happy how I was playing,” said Federer. “Can’t wait until we get a chance again to play him here, because you have to wait one entire year, got to win another five matches, and finally you’re in the finals again.

“So I think it’s very exciting for both of us, and also for fans, to see a rematch of the great final from last year. I’m looking forward to it, and I hope I can keep up my good play.”

“I like these big matches. I have been playing so well and I don’t feel tired. I feel great going into the finals, and I hope I can keep up this kind of a level. I know I need an extra special performance tomorrow because Novak’s going to push you there to come up with a lot of great shots in a row, which is not always easy to do.

Asked if his rivalry Djokovic is on par with Rafael Nadal, Federer said: “It will never be the same. Not better or worse. It just will be different just because the matchup is so unique for me with Rafa; whereas Novak’s is totally, like I said, straightforward.

“With Rafa I feel like I need to change everything when I play him. I have played so many times against Rafa on clay, as well, that it feels different; whereas Novak has been a much more of a hard court rivalry, whereas with Rafa has been more clay and grass.”

Federer on his rivalry with Djokovic: “What remains is that you know it’s always been tough against him. I have seen the rise of him, you know, as he’s gotten fitter and more match tough, mentally tougher, became one of the best movers we have in the game. It’s been nice seeing him do that, you know, and improve as you move along.

“Sometimes I wonder if everybody’s willing to improve as much as Novak did. It’s been interesting to see him figure his game out, and I’m happy I can still hang with him. I must be quite honest, because he’s in his absolute prime right now, and I enjoy the challenge of him. I hope he enjoys my challenge.

“So we will see tomorrow, but I think it’s a very dynamic rivalry we have. Great movement. I don’t think we need to change our games very much when we play each other. We can just go out there and play our game, which I think is quite cool also for fans and for ourselves, which is interesting.”