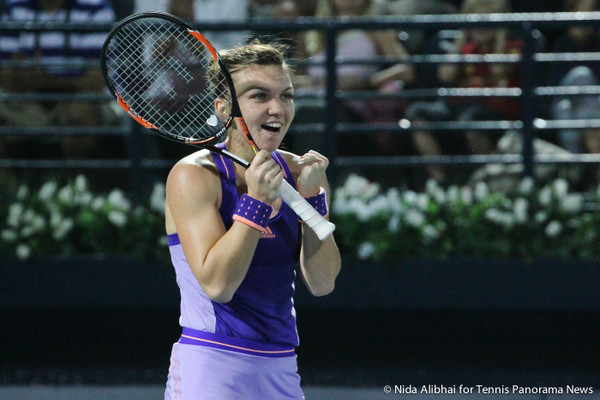 (March 22, 2015) INDIAN WELLS, CALIFORNIA – It might not have been the final that people wanted, in amongst the hoopla surrounding Serena Williams’ return and subsequent withdrawal in the semi-final, but with 16 minutes gone and only two games on the board, there was no doubt the crowd were going to get their money’s worth, between former champion Jelena Jankovic and World No. 3 Simona Halep.

It was always going to be important for Jankovic to be able to move, and having struggle with injury ahead of the match, she kept the press core in stitches with her lack of preparation, but ultimately bringing in attacking play as well as defence would be the key.

There were early signs of nerves by Halep who struggled for eight minutes as Jankovic put in a pleasing display of aggressive drive volleys and her trademark backhand down the line to take the first game, but failed to consolidate as Halep settled back down quite quickly, as the first passage of play resolved on serve as Halep got the first hold of the day.

Jankovic took the initiative once more, this time managing to consolidate on a break of serve, nudging her into a commanding position at 4-2. With Halep venting her frustration on her racquet, it was clear to see that Jankovic’s aggression was perhaps throwing Halep off her game plan a little, as the Serbian broke again to come out and serve for the match.

With Halep receiving a medical timeout for her toe before the second set, it was important that she came out to hold her first service game, but her relief was short lived, as Jankovic kept the pressure on, in fact if anything starting to get a little frustrated at herself, which may have spurred her on to put the hammer down on the Romanian.

A loose game by the Serbian to get broken to love put Halep back in the driver’s seat and the second set back on serve at 3-3, and for the briefest moment it looked like we could be in for the three-setter that we wanted but the Romanian handed the break straight back and with it, her hopes for her biggest title in her career.

Halep had to dig out a further break, aided and abetted by some typical Jankovic drama which included three double faults, a time violation warning, and Jankovic trying to serve while a ball-kid was still scrambling off the court. It was an emotional rollercoaster for Halep, who once more found herself rapidly facing break points succumbing to the fourth straight break of serve this match, but more dangerously giving Jankovic serving for the title.

Admitting to her coach Chip Brooks that she was nervous she reverted to the defence we often see in her game, just giving Halep the opportunities to dig out winners, breaking her with the fifth consecutive time this set. With finally a hold to stop the run of breaks, Halep suddenly seemed the aggressor as Jankovic tightened up as the match went into a decider.

Again the initial advantage went to the volatile Serbian, but Halep was never far away from breaking back, as the pair treated the crowd to some great rallies, not to mention more drama as the chair umpire seemed to forget about the nuances of second serves.

With both struggling to keep hold of their serve in the final set, Jankovic called her coach back once more but her serve and resolve seemed to desert her once and for all as Halep broke for a 5-3 lead to serve for the title, but handed back the advantage straight away.

It took yet another break to love to seal the deal for the Romanian 2-6, 7-5, 6-4 after what started out as a difficult week for her, after a personal bereavement. It had been a great run for Jankovic who struggled to deal with the nerves of closing out, having won her last title in 2013.

After the match, Jankovic admitted that she had let her opportunities pass her by.

She said: “I let those nerves take the best out of me. That shouldn’t happen. I was full of emotions. I was just overwhelmed and excited that I’m in the final and I put myself into a position to win.

“So it’s been an amazing two weeks. Yes, of course I’m disappointed that I lost this final, because I really had a chance to win and hold that trophy. But I’m still proud of myself and my team how far I came into this tournament and what I have achieved.”

Halep admitted she knew she was being rushed into mistakes, especially in the first set, and finally the key had been to make her run over the three sets.

Talking to the press with the giant glass trophy at her side, she said: “She knew how to play me today to make more mistakes. It was difficult for me to take that balls very high and without power, so I did many mistakes with my forehand.

“My coach came on court and he said that I’m rushing at that balls. So I said, Okay, I understand, and I go now to play not very strong those balls.

“I just try to stay cool, to make her run a lot. I know that she’s running well, but still my backhand down the line was good today. Forehand so so. Everything went well, and, you know, I have no comments now. I have like, in my mind, it’s like ‑‑ I have another title, my biggest title now, so it’s amazing. I feel great.”

After attempting to lift it, she confirmed she intends to play Miami, as does Jankovic.