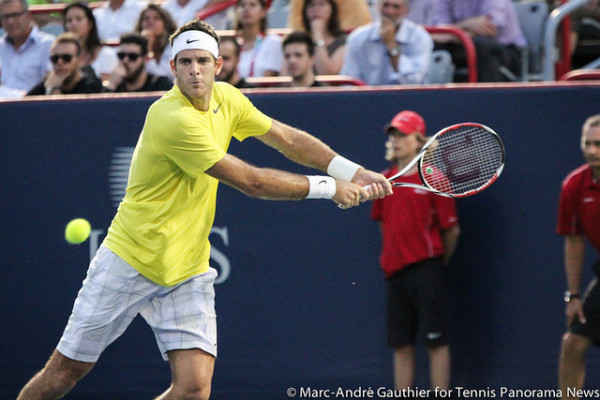 (March 26, 2015) Returning to the court for the first time since January 15, Juan Martin del Potro‘s recent attempt at comeback from wrist surgery ended in a first round loss at the Miami Open on Thursday.

For Pospisil, it’s his first-ever win at the Miami tournament.

Del Potro’s rustiness showed in the second set when he failed to serve it out up 5-4 and then squandered set points in the tiebreaker, double-faulting twice, which led to match point against him.

“Obviously down there I wanted to win the match, and I had few chances in the first set; then in the second set I know I have set points, but I couldn’t close the set because I had easy efforts and easy mistakes,” del Potro said.

“I didn’t serve well in the special moments, which is tough for me with all of these things.

“But now I’m okay. I don’t have any physical problem after the match, and I will be recovering soon for the future.”

“I didn’t really know what to expect,” said the Canadian in regard to taking on del Potro.

“That was a little bit added stress maybe before. But at the same time, I was just trying to focus on serving well and playing my game and trying to put pressure and coming to the net.”

“Whether he had pain or not, you know, it’s obviously not the same backhand that he normally plays,” Pospisil added. “I tried to take advantage of that by coming in and putting pressure on that side.

“But, you know, he’s still serving well and hitting his forehand huge, which made it tough. I just hung in there, you know, maybe got a little bit fortunate at the end. He was serving; had set point on his serve; but then the rest of the way I played well.”

“And I also need time to improve my backhand again. I already been hitting backhands the last 10 days in one year, which is very ‑‑ it’s very bad to play in this level.

“It’s just a wrist problem. Of course mentally you must be strongest enough to deal with the problem and get up every morning to do your treatments and rehab and stay calm, looking forward for the future.

“It’s only 2 months after my second surgery and my left wrist. I feel better week by week, but it’s still very early to feel 100%.”

“It was like a Davis Cup atmosphere,”  said the 24-year-old Pospisil of the lively crowd cheering for his opponent. “I felt like I was playing away somewhere.

“It was a great atmosphere. Whether everyone is cheering for me or against me or if it’s equal, you know, when there is a big crowd and when they are into it, it’s always more enjoyable for everybody. I was enjoying it more, and actually might have helped me a little bit in the end, to be honest.”

The Canadian will take on No. 9 seed Grigor Dimitrov in the second round.

As for the 26-year-old del Potro, he’s taking his comeback one day at a time: “I think it’s the most important be patient and stay calm, and also try to be positive.

“I got depressive for a while in the past. I have been talking with (Janko) Tipsarevic, as well, at the locker rooms. He knows a lot about the injuries, about comebacks, and doesn’t make it.

“But in the end, I want to play tennis. If I have to learn a different backhand to keep playing, I will do it.

“But now I’m trying to do all my things to fix the problem and hitting my backhand as I did in the whole ‑‑ all my career. I am still positive.

“I think is the biggest goal for me trying to keep trying and stay mentally strong enough to go through all of the injuries.”