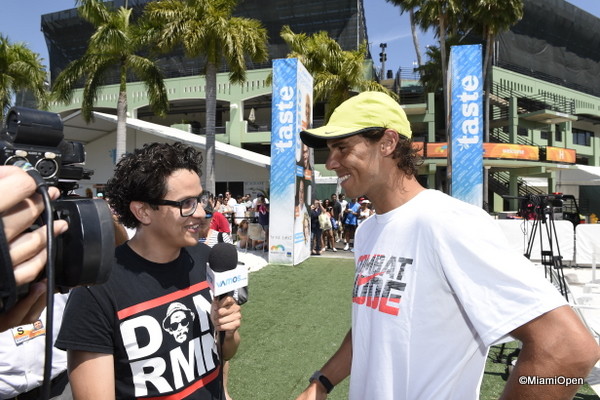 (March 27, 2015) Fourteen-time major champion Rafael Nadal has won almost everything there is to win on the men’s tennis tour. One of the few titles which has escaped him is the Miami Open. Nadal a four-time finalist, began his quest for his first title with an 89-minute victory over Spanish countryman Nicolas Almagro 6-4, 6-2 to move into the third round.

Nadal was asked about his ankle which he hurt during practice earlier in the week.

“I am well, no?,” said the second seed. “I had just a little bit, how do you say, small torn in the beginning, so it was going to be tough.

“The day after I had pain, but after two days I improved 50% and stays the same. It’s not limiting my movements.”

“The real thing is the wind was really high,” Nadal said of the breezy conditions on court. “Very difficult to find a positive feeling on court.

“But in general I think I played a solid match. I played well. I had a good movement. I think I moved myself quick for moments, and when I had to put the balls in and play with no mistakes ‑ that was the idea today with that very tough conditions ‑ I did, I think.

“For some moments I went for the points. I worked well with my forehand. I had some good winners.

“Yeah. I’m happy the way that I played. Sure, second round against I don’t know yet, but Almagro was not an easy opponent for the first round. I am happy for that.”

Nadal who raised his record against Almagro to 11-1, will face the winner of Fernando Verdasco, and James Duckworth in the third round.

“The court in Miami I think is the same than since 10 years, since I came here,” Nadal said. “I don’t see difference with the court, no?

“The ball is heavier here than in Indian Wells for the humidity, so the ball flies is little bit slower through the air. That’s it.”

Two-time Miami champion Andy Murray defeated Donald Young 6-4, 6-2 in 82 minutes in an earlier match. Murray defeated the American recently – in Glasgow during the first weekend in March, when Great Britain defeated the United States 3-2 to reach the quarterfinals of Davis Cup.

“I played well against him the last couple of times,” said the third seed. “Obviously today was a very different match to Davis Cup; completely different conditions.”

“The tactics that you go into the match with completely change because of the weather and the wind.”

The Scot is just two wins away from reaching a milestone – to become just the ninth active player to win 500 ATP World Tour –level matches.

Murray will match-up against 27th seed Santiago Giraldo in the third round.