You are here: Home / Features / “I’m at a great place now” – Novak Djokovic Meets the Media in Miami 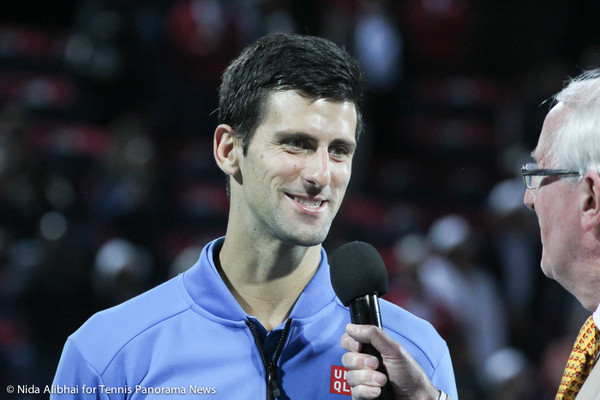 (March 27, 2015) Defending Miami Open champion and world No 1 Novak Djokovic met the media on Friday ahead of his first match singles match, after losing in his doubles match with countryman Janko Tipsarevic. Robert Lindstedt and Jurgen Melzer edged the Serbian pair 6-4, 3-6, 10-7.

The former No. 8 Tipsarevic had been sidelined with a foot injury since fall 2013.

“The opportunity to play with him today was very special for me as a friend, and I cared very much to win this match today,” said Djokovic. “I got very tight in the super tie-breaker, I have to say, because it was a very tough match. We lost to two of the great, very good doubles players.

“But we talked after the match, and he appreciated the fact that he can actually play; just feel that match play, have that sensation of how it feels and what it takes to be on the court.

“Seventeen months is a long time for injuries, and he’s also not young. You know, he’s now 31 this year. But he’s eager to play. He’s motivated. He right now has been practicing for a couple of weeks 100%, and he decided actually it’s better to skip this tournament in singles because he needed a little bit more time to get into it.

“Hopefully this doubles match today can help him. When he plays now in Houston after Miami he can perform his best. He can relax. He has the quality to go back to where he was. You know, that’s top 10. I really wish him that”

The eight-time major champion is seeking his fifth Miami title.

Djokovic reflected on this 2015 year so far: “I started the season very well with winning Grand Slam (Australian Open), and that definitely helps my confidence level. I finished the 2014 season in a great form winning Paris (Masters) and London (ATP World Tour Finals) back to back and then winning Australia and playing finals Dubai, Davis Cup, and then Indian Wells.

“Of course I’m at a great place now. I try to enjoy and take the best out of the feeling that I have on the court right now.

“Hopefully I can have another great week in Miami. The record that I had in last, you know, eight, nine years I have been coming back to Miami and playing the tournament is really good. Some of my best tennis I have played here in these courts.

“That can hopefully help me to get far in the tournament. We are here in United States for, you know, some of the biggest events we have in sport, Indian Wells and Miami for four weeks, playing best of three, and it’s well spread.”

On his mindset coming off a big win at Indian Wells:

“Playing more matches and spending more time in the highest level in tennis allows you to understand, you know, how you need to approach and have the healthy approach to every tournament.

“Back in 2011 when I had the best season so far in my career and became No. 1 of the world, I was so much blown away and so happy by those terrific achievements that, you know, it was difficult for me the year after to kind of face all those challenges, to defend points, and was a little bit carried away by a lot of distractions, I would say, you know, off the court.

“But it allowed me ‑‑ those kind of experiences allowed me to grow and to become stronger mentally, you know, as a tennis player and as a person, and to find the right balance between the private and professional life, to enjoy the life that I have, to really embrace everything that life is presenting to me.

“But yet again, stay professional discipline, committed to the sport that I love.

“So I think right now I found the right balance, and I’m at the peak of my career and my abilities. Hopefully I can maintain that for the time to come.”

“I think the best thing about the social media and social platforms is the fact that you can interact with the people that follow and you support you.”

“So this is one of the ways to give them back, not just on the court by playing good tennis, but also you interact with them and feed them with some video or picture content that would give them a different look at your personality. Not just what they see on the TV when you’re playing tennis, but something else, to present yourself as a person.

“Everything has its borders, obviously, but I try to, you know, kind of post ‑‑ most of the content I post is something that is fun, something that is different. You know, sometimes I have to show them that I’m working in the gym or on the tennis court, that I am preparing myself.

“But mostly some other fun stuff for people that I get to meet along the way.”

On his life now as a husband and a father: “Right now I’m a complete person and really fulfilled in every aspect of my life. Became a husband and a father in last 10 months, and that’s a very important milestone for me that has definitely contributed in a positive way to my tennis, as well.

“I’m not taking things for granted. I am very grateful for the opportunity to play the sport that I love, and still kind of fulfill my parental duties and, you know, be, I would say, accomplished as a husband and a father.

“I cannot complain. It’s a great place in my life where I am at the moment, and trying to take the best out of it.”

“I really appreciate the fact that I’m playing tennis. Probably the childhood that I had, the circumstances in life that I had to face and overcome to be where I am at this moment allowed me to observe things in life in a different way, in a more humble way, I would say.

“The fact that I come from a very small country, the fact that I overcame some challenges that seemed impossible at the time with the war and sanctions and all these things and arrived to where I am, that has shaped me as a person and my character, and helps me now to have this kind of approach that I believe is the right one.”

Djokovic begins his quest for another Miami title on Saturday evening when his faces Martin Klizan.