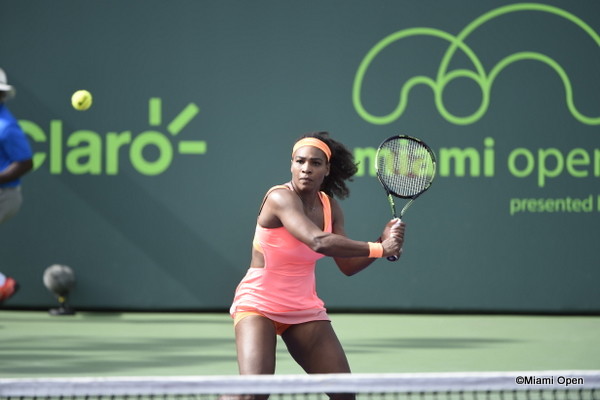 Venus and Serena could meet in the final of the tournament.

Venus did not return to Indian Wells as her sister did two weeks ago but spoke about her sister’s return.

“It was wonderful to see,” Venus said. “I definitely watched every moment, and it was great to see her and my family there. Next year will be a big year for us being an Olympic year.

“I can’t exactly say what my schedule will be, but it was wonderful to see her reception.”

“I have heard so much about how much the tournament has just improved in general in terms of the fans and the players.

“So it will be something to see for me.”

“I think a lot of the things happened to help me become a better player in the past few years. You know, that’s another thing. I was really motivated by her and her spirit and her fight.

Four-time champion and No. 1 Novak Djokovic beat qualifier Steve Darcis 6-0, 7-5 to reach the final 16 where he will meet Alexandr Dolgopolov.

“I saw a couple of matches he played here, and he’s feeling good,” Djokovic said of his next opponent. He likes this surface. Generally likes a bit slower court with a higher bounce.

“Very quick dynamic motion on the serve and can serve very big for somebody of his height. And moves around very well around the court.

“So I know his game pretty well. I know what to expect. Hopefully I’ll be able to start as well as I did in the first two matches, but then end it in a bit different way. Keep the concentration going, you know, all the way through.”

Also advancing were No. 4 Kei Nishikori, No. 5 Milos Raonic while No. 9 Grigor Dimitrov fell to John Isner in straight sets.