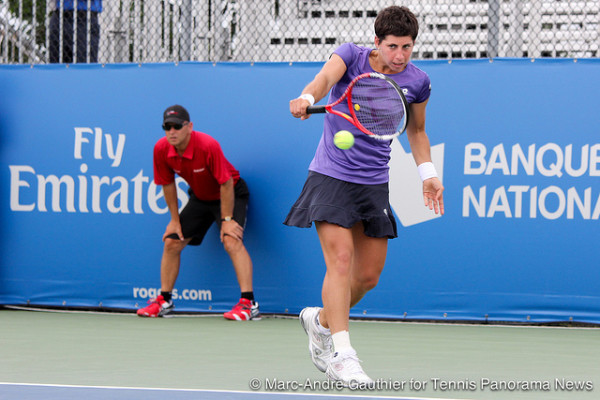 (March 31, 2015) In a very topsy-turvy match, Spain’s Carla Suarez Navarro recovered from losing the first set 6-0 to recover to defeat three-time champion Venus Williams at the Miami Open on Tuesday 0-6, 6-1, 7-5 to reach the semifinals.

The second set saw a reversal of fortune for the Spaniard, as she moved 16th seeded Williams from corner to corner, dominating with her forehand.

Both women broke each other’s serve, the 12th seed Suarez Navarro coming back from twice from being a break down.

The victory for the Spaniard moves her into the most important semifinal of her career- a Premier Mandatory. A win in the semifinal will move her into the top ten for the first time.

“It was a crazy match, crazy first two sets,” said the winner. “Venus was unbelievable at the beginning.

“I start a little bit nervous, but, you know, in tennis, even if you lost the first set, you’re still in competition. I’m happy with the way I come back after the first set.”

“Just a little too many errors and I was going for it the whole match,” Williams said. “Towards the end just never found the happy medium between being aggressive and putting the ball in the court.”

“Of course I want to play well every match as much as I can,” the seven-time major champion said, “I feel like I have the ability to win this match.

“Unfortunately it was a loss, but I learned a lot from them, and they always make me better. “

The Spaniard will play No. 9 seed Andrea Petkovic for a place in the final. The German ousted No. 14 Karolina Pliskova 6-4, 6-2, earlier in the day.