(April 1, 2015) Serena Williams overcame some inconsistent play to earn her 700th career win in defeating Sabine Lisicki 7-6 (4), 1-6, 6-3 to earn a spot the semifinals of the Miami Open on Wednesday.

Her 700th win puts the American in a very select club which has only eight members.

“So now I’m like I just want to keep going, doing the best that I can. Just staying positive and winning as much as I can.”

“I grew up playing tennis. I think my destiny was to play tennis,” Williams said. “I saw a picture where I was in a stroller on the tennis court.”

Williams made 51 unforced errors on the day, had some problems with the sun and served well below her usual efforts.

“At the start of the third set it was definitely a little bit of a natural reaction. Obviously I don’t want to lose, or at least I want to try to do the best I can. She had a lot of momentum going into the third set after winning the second set, so I just wanted to stay strong, and basically hold my serve.”

Williams will battle No. 3 Simona Halep for a place in the final. The Romanian defeated American Sloane Stephens 6-1, 7-5.

“I look forward to it because I didn’t get to play her last time,” said Williams. “I was really disappointed to not be able to play and just not even be close to 100%.

“So, you know, I look forward to it this time. I’m just happy to be in the semis and still be alive somehow.” 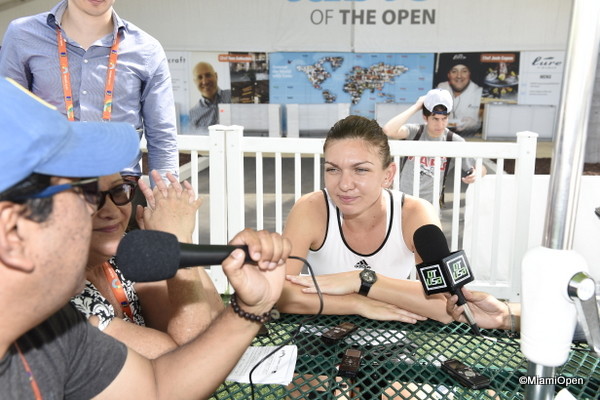 “It will be a very nice match,” Halep said after he win. “I have to try everything. She is No. 1 in the world. She’s the best player. I have nothing to lose.”

“I have just to play aggressive like I did today at the beginning the match. I think this is the most important thing to have to the chance against Serena.

“So I just want recover my body until tomorrow and to be ready it hit the balls.”

No. 9 Andrea Petkovic will face No. 12 Carla Suarez Navarro in the other semifinal on Thursday. 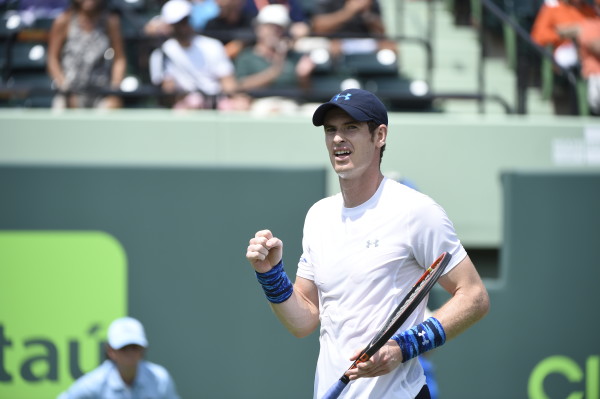 In men’s action, two-time Miami champion world No. 4 Andy Murray advanced to the men’s semifinals by rallying past unseeded youngster Dominic Thiem 3-6, 6-4, 6-1. Murray will play No. 8 Tomas Berdych next.

“At the beginning of the match I didn’t return well, especially returning his first serve,” said the Scot. That put me in sort of a defensive position a lot when he was serving. I ended up doing quite a lot of running there.

“Returned the second serve well, but everything he made a first serve I was returning short and he was dictating all of the points.

“I thought on my own serve was doing fine. I just played one bad game, and my return game let me down a bit in the first set.

“Then, again, the second set I went up and I was creating quite a lot of opportunities, which was good, but just not quite finding the right shot.

“I think in the third set the difference was really my returning. Returned his first serve extremely well. I put him on the back foot. When I was returning the first serve well I was able to dictate points when he was hitting his first serve, and on his second, and then on my first serve as well.

“So when you’re sort of able to control 75% of the points, makes a huge, huge difference. That’s the most pleasing part for me.”

It was a career week for the 21-year-old Thiem who reached his first Masters 1000 quarterfinal.

“Before this week I would have given a lot for the quarterfinals, but now of course in the first moment I’m a little bit disappointed, especially I won the first set,” said the Austrian. “I played a good match.

“But, yeah, I will leave Miami positive for sure and with a good feeling for the clay court season.”