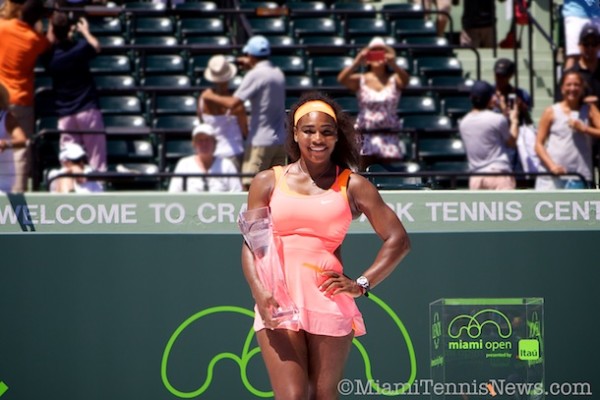 This was the American’s 66th career title victory, which leaves her one behind Billie Jean King on the All-Time list.

All-time WTA titles leader Martina Navratilova who won 167 singles crowns was in attendance to present the winner’s trophy to Williams who won her third Miami title in a row. Her career record in Miami is now 73-7.

Williams became only the fourth women to win the same title at least 8 times. Navratilova holds the record for the most number of titles at a single tournament – 12 in Chicago.

It’s also Williams’ second tournament title of the year, the first one coming at the Australian Open adding her 19th major title in January.

“When I play with Serena I know that she’s the best,” Suarez Navarro said. “She has the game to make me play bad.

“But, well, this time I believe in me, in how I’m playing the other match. I try. I try until the last point, but was tough and was difficult for me.”

“I just kind of went out there and was hitting,” Williams said. “I didn’t have a plan it hit to her backhand or forehand. That’s never really my plan. I just can’t do that. I get too worked up.

Williams remains unbeaten on the year and has won 21 straight matches since her loss in the Round-Robin stage at the 2014 WTA Year End in Singapore.

Asked about possibility of winning a calendar Grand Slam, she said: “Obviously anyone that wins the Australian Open wants to win a Grand Slam.

“I’ve won the Australian Open six times and I have not done that yet. I’m not saying this is the year or not the year. Who knows?”

Williams had to withdraw from the semifinals of Indian Wells two weeks ago with a knee injury.

Although a dominant winner, Williams felt she could have played better during the tournament. “I had to improvise in some of my matches,” she said. “Quite frankly, I had to take some pace off today because I wasn’t serving the way I normally serve. I normally serve tons of aces really hard.

“This tournament I wasn’t serving my best. On the flip side, it’s good to know that I can win relying on my groundstrokes or relying on other shots. It’s not just one shot that makes me good. It’s an all‑court game.

“It’s comforting, but at the same time, I definitely want to get my serve going again. I just really haven’t had time to practice. I’ve just been dealing with injuries, and when I’m practicing I’m hitting groundstrokes and just not hitting enough serves.”

For Suarez Navarro, despite the poor performance in the final, it was a career week for the Spaniard who will be the third Spanish woman to break into the Top Ten for the first time next week.