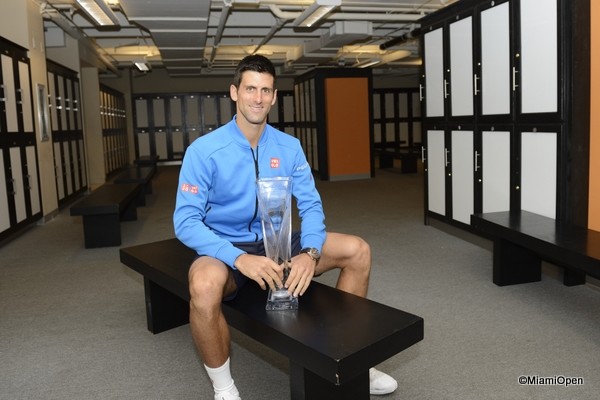 “Well, it’s obviously nice and flattering to hear that I have achieved another record,” Djokovic. “Of course I do pay attention of that. Any kind of achievement that goes into history books I’m hugely proud of and I appreciate it very much, because I work hard for it and I do cherish it.

“Again, it’s not something that obviously takes away my discipline. It just allows me to motivate myself even more. Just going to try and keep the same routine and mindset so far which helped me to achieve all these results.”

World No. 1 Djokovic broke Murray five times in the over two-and-a-half hour match in which he won his 22nd Masters Series crown. It is the 27-year-old Serb’s fifth Miami tournament victory.

“It was just very tough, brutal conditions for both of us,” Djokovic said about the hot conditions on the court.

“First set was really up and down for both of us, and we tried to stay mentally tough, both of us, and kind of hang in there, battle, and wear down the other player physically. 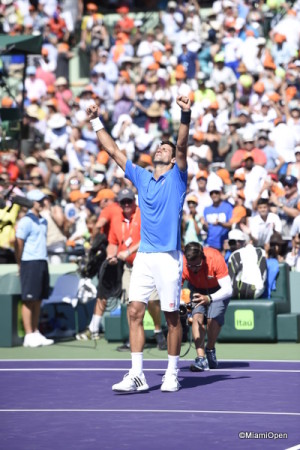 “There were lots of exchanges, a lot of long rallies. I was expecting that coming into the match, but one thing is to really expect and the other is to really experience it and really go through it on the court.

“So wasn’t easy, but as I said, it was the same for both players. I played a good tiebreak; managed to hang in there. Wasn’t really a great tennis display. A lot of unforced errors.

“But in these conditions you just want to try to stay with the other player and extend the punching exchange and try to wait for the opportunities. I did have some opportunities in the beginning of the second set where I maybe could have gotten the break and maybe win the match in straight sets, but he came back. He played better in the second.

“Then the third the beginning was, again, important part. First two games were pretty long. I managed to win those. After that, I felt like he was getting tired. That’s where the momentum was on my side.

“But generally it was just a physical battle between the two of us that play similar game. You know, we haven’t served that well, so we haven’t had that many free points, as a matter of fact. With first or second serve we needed to earn every single point, to work for it.

“That’s why this particular match was very tough.”

“I struggled physically,” Murray said. “I mean, yeah, I played very well for a couple of sets. Maybe I could have done a little bit better in the tiebreak in the first set.”

“I feel like when I play well against Novak the matches tend to be pretty physical, long, grueling matches. It’s tough, but, I mean, that’s what part of being a professional athlete is, is dealing with those different conditions and making those adjustments.”

Asked about what makes Djokovic difficult to play against Murray said: “He serves well, he runs well, he moves exceptionally well. Physically he’s in great shape; he hits the ball well off both sides.

“So, yeah, he does most things on the tennis court well. That’s why he’s the No. 1 player in the world just now.

“In terms of game‑wise, I feel like in a couple of the matches we played this year I feel like I’ve been able to hang with him, but just not quite for long enough unfortunately.

“Yeah, I need to try to work out why that is. Like I say, I can’t do loads more than what I’m doing to get myself in the best condition possible.”

For Djokovic, it’s his seventh straight win over the Brit, raising his overall head-to-head record to 18-8. Murray who will be getting married in Scotland on Saturday, will move up in the rankings on Monday to world No 3.