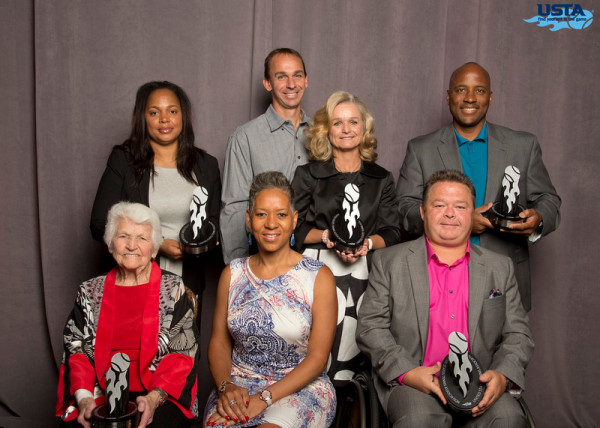 (April 2015) The United States Tennis Association announced the five winners of its Annual Awards presented at the USTA Annual Meeting and Conference held at the Boca Raton Resort & Club in Boca Raton, Fla. The honorees were recognized for their dedication to growing the game.

The USTA NJTL Founders’ Service Award was created by USTA Diversity in 2011 and recognizes an individual NJTL chapter founder who is committed to positive youth development through tennis and education and provides free or low-cost tennis, education and life-skills programming to thousands of underserved children each year. The award is given to the recipient reflecting the values of NJTL founders Charles Pasarell, Sheridan Snyder and Arthur Ashe.

The award is given annually and recognizes the outstanding services of a USTA member organization through its commitment to the tennis community, the organization’s members and the game of tennis. The award was instituted in 1981.

The Ralph W. Westcott USTA Family of the Year Award was created in 1965 by the USTA in honor of the late Ralph W. Westcott to emphasize the theme that “Tennis is a Family Game.” The award is given annually to the family that has done the most to promote amateur tennis, primarily on a volunteer basis. All members of the family should participate in tennis in some way, either as players or by offering their services in running programs or tournaments or in junior development activities.

The Seniors’ Service Award was established in 1958 and is given annually to the person most deserving of the respect and honor of all senior players. It is awarded on the basis of the recipient’s willingness, cooperation and participation, either in play or organizational work, for the betterment and furtherance of senior competition. The award was first awarded to W. Dickson Cunningham of Rahway, N.J., for whom the trophy is named.

The USTA Annual Meeting and Conference brings together USTA leadership, national staff, national committee members and section volunteers and staff in pursuit of the USTA mission: To promote and develop the growth of tennis. Along with leadership and committee meetings, the USTA Annual Meeting and Conference provides education opportunities for all attendees to develop and enhance their personal and professional skills and learn new ways to promote the game of tennis.