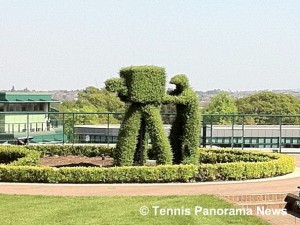 (April 28, 2015) LONDON, UK – Wimbledon unveiled their new facilities as part of their continuing development, along with to top the list of the four Grand Slams in terms of topping the prize money fund for another year.

With the work complete under Courts 14 and 15 this year, the tournament’s ball boys and ball girls will have larger dedicated surroundings, as will the world’s press who now have a larger, 24-hour media restaurant and bespoke areas for the photographers.

The plan to continually develop grass court tennis really comes into play with the ‘Three Week Gap’ between the end of the French Open, and the start of The Championships.

With players in mind, their facilities have also been updated, with larger locker rooms, ice baths and additional physiotherapy and treatment spaces, along with a new restaurant and warm up area.

New ATP events have been scheduled in Stuttgart and Nottingham for the ATP with the WTA also debuting an event in Nottingham in the first week, with WTA Birmingham and Eastbourne as Premier events on the calendar.

Wimbledon has prided itself on building in significant increases in prize money over the last three years, increasing the prize purse to £26.75m ($40.60 million dollars), a 7% increase from last year.

This years Gentleman’s and Ladies’ Singles champions will pocket £1.88m ($2.85 million dollars ), again a 7% increase from 2014. Qualifying and first round losers will also receive an increase this year.

The plans for Court 1 continue, with the planning permission for the development having been approved in December 2014. The plans include a retractable roof which should be completed in 2019, with a fixed roof in place by 2018.

The Championships will begin a week later than previously, starting on the 29 June – 12 July.