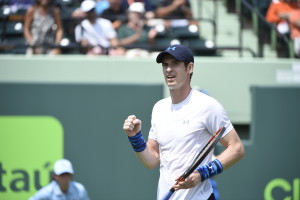 For the world No. 3, it’s the Scot’s 32nd career ATP title. He became the first British man to win a title on clay since Buster Mottram won Palma in 1976.

“It means a lot to have won,” said Murray. “It was my first final on the clay, having lost a few semi-finals at Roland Garros, Rome and Monte-Carlo. We played a very high standard match. I just managed to hang on at the end.

“He served unbelievably well. I had very few chances when I was returning. We may even play one another in Madrid on Wednesday. Philipp is a superb competitor and fought right to the end. It is nice to have won my first clay title and I hope to win another one soon.

“The tournament is extremely nice. It has had very good crowds since the beginning of the week and it is nice to play in a club. There is obviously a lot of tennis fans here. We were unlucky with the weather and when it is like it has been it is difficult for everybody. I enjoyed the week.”

“It was a great atmosphere and a great crowd,  said the two-time Munic champion Kohlschreiber of his home country. “We both gave everything. It was so close, but at the end there has to be one winner. Unfortunately, for me, it was Andy. It was a fantastic game.

“It was a very special moment for me, in front of a home crowd. I think I pushed Andy to the limit. We had some unbelievable points. I think, for the spectators who came, it was one of the best Munich finals.

“Munich is always very special. It is my best tournament on the tour. I love playing here and on the clay. This gives me a lot of confidence for the future.”

Both men head to Madrid to compete in the Madrid Open.