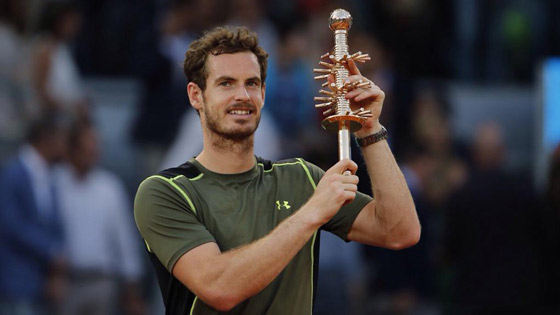 (May 10, 2015) Andy Murray defeated Rafael Nadal on clay for the first time in his career on Sunday, 6-3, 6-2 to win his second Madrid Open. Just six days ago Murray claimed his first career clay tournament in Munich.

For Murray it was his 10th Masters Series title, first on clay and 33rd overall career tennis title.

Murray is undefeated since getting married on April 11 to his long-time girlfriend Kim Sears.

After his victory, Murray signed the TV camera glass with the words “Marriage Works.”

“Obviously the tennis has gone well (since the marriage),” Murray said. “You’re happy and that helps your performances on the court.”

“Today I was just more consistent, Murray said of the match. “In the second set Rafa was starting to play better at the beginning and the middle part. But I stayed strong in that period of the match and he started to make some mistakes at the end that he wouldn’t normally make. That obviously helped me finish the match.

“I wasn’t expecting this a couple of weeks ago, so when things are unexpected, it feels nicer. I didn’t feel like I put too much pressure on myself the last couple of weeks, which is a good thing. But obviously to win a Masters 1000 on clay is a step in the right direction. It’s something I had never done before. So that’s good progress there.”

“For me it was obviously a very tough match, you know winning against Rafa on clay is extremely difficult, one of the hardest things in tennis,” Murray added. “From my side it was a very good performance. I’m sure Rafa feels he could have played much better. But from my side, I couldn’t have done much more.”

“This wasn’t the game I wanted to play, but I tried to the very end,” Nadal explained. “Still, it was a very important and positive week for me, I recovered sensations that I hadn’t felt in a long time.”

“I’ve played a couple good matches [this week], especially yesterday’s match,” Nadal said. “It’s one of the best matches I have played in a long time. So I cannot leave Madrid not happy. I have to leave happy and just delete what happened today. I will just stay with the good things that happened this week, and there are a lot of them, more good than bad. I will try to recover the good feelings in Rome. I think I’ve made a step forward and I’m playing better. My game is better.”

With the loss, Nadal’s ranking will fall to No 7 as of Monday. Murray’s ranking remains at No. 3. Both men will play the Rome Masters this week.

Petra Kvitova won the women’s title on Saturday beating Svetlana Kuznetsova 6-1, 6-2. The world No. 4 ended the 27-match unbeaten of Serena Williams on Friday.