You are here: Home / Approach Shots / From ATP Pro to “Shark Tank” – Zack Fleishman Talks About Being an Entrepreneur 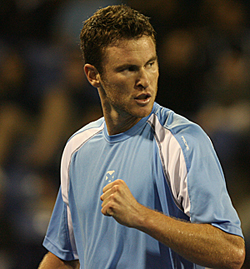 Shark Tank, which has aired on ABC since 2009, is a program in which aspiring entrepreneur contestants make business presentations to a panel of “shark” investors.

The former tennis player who reached a career-high singles ranking of No. 127 in 2007, will have his company Shark Wheel featured on the program. Fleishman is the company’s Chief Operating Officer.

Shark Wheel is based in in the Lake Forest community of Orange County. Shark Wheel’s technology guru David Patrick has literally reinvented the wheel with a design that offers superior performance advantages to the traditional wheel.

“What happened was that I was having my best year in tennis in 2007, reached my career high of No. 11 in the United States, No. 127 in the world and in 2008 I flew off a mountain bike and had a horrible accident, said the 35-year-old Californian. “My tire popped and I flew over the handlebars and severely injured my shoulder, I tore everything, so I had to get reconstructive shoulder surgery. And I tried to come back a year later. I actually won a futures tournament and I had to get a second shoulder surgery, re-torn in the same spot. So that basically knocked me out of competition.”

“Then I started teaching tennis full-time and then what happened was my tennis coach, he was also my fitness trainer. He used to travel with me to the U.S. Open and a bunch of other big tournaments and he used to always make fun of me because I used to read science books all the time. That was my obsession – physics, cosmology, anything to do with science.

“So he introduced me to one of his clients and it started off for the first two months as me almost being his apprentice, learning all about the discoveries that he made, it was beyond fascinating.

“And then it slowly turned into a business relationship when he had all these unique shapes that came out of this discovery.

“Then one day he said, did I ever show you this wheel.

“He showed it to me, and I literally called the patent lawyer five minutes later.

“And we changed directions only working on the (Shark) wheel.

“I was just extremely hungry to help him get his ideas to the marketplace and that’s how I got involved and went from tennis into entrepreneurship.”

A small company based in the Lake Forest community of Orange County, Shark Wheel’s technology guru David Patrick has literally reinvented the wheel with a revolutionary design.

Patrick’s passion for skateboarding along with his interest in the natural world led to the discovery of the Shark Wheel.  Patrick discovered the shape while studying natural sciences. It is based on the shape of shark jaws and is a pattern found throughout nature. Once he realized the significant advantages of the wheel, a team was assembled, a patent was obtained, and Shark Wheel was born. The Shark Wheel offers a faster ride, more slide control, and better grip through rain and rough terrains.

The Shark Wheel can be used for almost any application that uses a wheel, but it is the company’s intent to manufacture only skateboard products and roller skate/roller derby wheels.  Shark Wheel ‘s expansion into a full spectrum of markets where the Shark Wheel could increase efficiency, roll faster, and maneuver through uneven surfaces would be executed only through licensing agreements.

As for expanding the wheel’s use, Fleishman said: “We decided to start in skateboarding because it’s a cool market.

“We plan to go into a variety of markets – doing licensing deals from everything from scooters to roller skates to luggage to office chairs, all the way down to cars one day.”

Any possible use of this wheel in tennis someday? “Not quite yet -we may be able to throw some wheels on the umpire’s chair and a couple of other places,” the entrepreneur said with smile in his voice, “but I plan to look into that soon because I’d love to bring my current business back into the tennis world somehow.”

Fleishman talked about playing pro tennis versus what he’s doing now in the business world: “I look at business as a sport and when I was playing tennis, all I was doing was trying to out-work my opponent, out-think my opponent and figure out ways to get ahead, find advantages – and that’s exactly how I look at business.

“I’m scared that my competition is out-working me, out-thinking me. So even though it’s a lot less physical, it’s a lot more mental, it’s a whole new exciting learning curve for me to master the art.

“And I’m just an extraordinarily competitive person and I look at this as a different sport that I took up.”

As for preparing his pitch for Shark Tank, “We were only given a few weeks of preparation time so it was a full-time job getting ready for the show, he said. “We had a very small time frame to build prototypes to show on the show and I had to learn every single part of our business, every single number, down to the penny. I was very well-prepared by the time the filming of the TV show came around.”

The show was taped a few months ago.

The former world No. 127 still keeps up with the tennis world. Of particular interest to him is college tennis and the up-and-comers on the pro tours.

He’s very proud of having coached the No. 1 women’s college player – Maegan Manasse of the California Bears, University of California, Berkeley. He predicts that she’ll be a Top 20 player someday. He thinks she’s ready for the pro tour and to keep an eye out for her as she’s been “under the radar” for her entire career.

As for the men, Fleishman likes to watch Dominic Theim, Borna Coric. “I really like watching those young guys, how they are able to perform at such a high level at such a young age.”

“It’s so amazing for me to be part of a new discovery that has never occurred in all of human history – somebody reinvented the shape of the wheel and it actually out performs a traditional wheel.”

See if Fleishman can convince the panel on Shark Tank to back the Shark Wheel on Friday, May 15, 2015 on ABC-TV. Check local listings for the time and the exact channel.