You are here: Home / Features / Djokovic and Federer to Meet in Rome Final 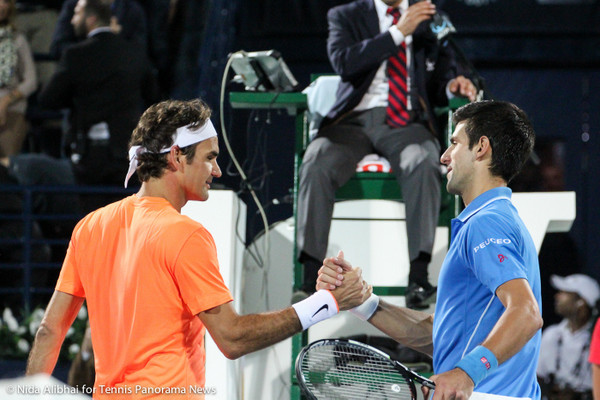 The women’s final in Rome will feature two-time former champion Maria Sharapova against Carla Suarez Navarro. Sharapova beat Russian qualifier Daria Gavrilova 7-5, 6-3 while Suarez Navarro rallied past No. 2 seed Simona Halep 2-6, 6-3, 7-5. The win for Sharapova means she’ll move back up to No. 2 in the rankings on Monday and will be the second seed for the French Open.

“We were breaking serve all the time, but it’s because we were both returning very well,” Suárez Navarro said. “It was tough for me, it was tough for Simona – but I’m really happy with the way I finished the match today.

“I’ve been practicing really hard during the whole season, and I’m playing with a lot of confidence right now. I’m playing more aggressively, which is important when you’re playing the top players.”

Federer will be seeking to win a Masters event he’s never won on Sunday. This is the fourth time he’s reached the finalThe No. 2 player has never won Monte Carlo either.

“I just like winning a title. Now OK, this is Rome, and it’s one I’ve never won so you might think it’s extra special but for some reason it’s not for me,” Federer said.

“Stan played well in the first set,” said Federer. “In the second set he had a sort of breakdown. He wasn’t serving his best. I was definitely able to take advantage of it.”

Both Djokovic and Federer had some concerns about the court which had holes. Federer’s feet were stuck in a hole and could not turn around to take a shot.

“In a couple of places the holes are really deep,” Djokovic said. “If you slide and get into that hole you can twist an ankle easily. It’s dangerous to play in these conditions.”

Federer and Djokovic will be meeting for the 39th time, with Federer leading the head-two-head 20-18.