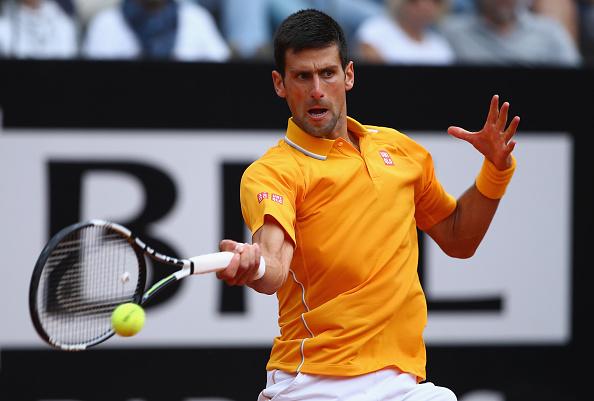 (May 17, 2015) A week ahead of Roland Garros and No. 1 Novak Djokovic is perfect on clay courts this year. He added to this year’s clay court resume with 75 minute 6-4, 6-3 title defense win over No. 2 Roger Federer to claim his fourth title at the Italian Open. It’s also the Serb’s 24 Masters Series 1000 tournament win, one ahead of Federer and three behind overall leader Rafael Nadal at 27.

The win, his fifth championship of the season, was his 35th career title which extended his current win streak to 22. He has a 37-match win streak at the majors and Masters 1000 events going back to the Paris Indoors last year.

Speaking in Italian of the crowd after the victory, Djokovic said: “It was a great week and today was my best match. It’s always a pleasure to play against Roger and obviously I’m very pleased by today. Along with 2011, this is the best year of my career. I don’t know how (to) continue at Roland Garros but obviously I have a lot of confidence. I hope I can continue like this.”

“I was able to find my way through. Roger put a lot of pressure on my service game at 4-4, but I managed to respond well, to gain those break points, move him around the court, and then I played a couple of great points that gave me the set” Djokovic said to media. “When you’re a set up, the momentum is shifting to your side and you start to feel better.

“The fact that I have managed to win so many matches in a row gives me a reason to believe I can do it again… I want to keep going as long as I can. I don’t want to think fear or everything else can be an obstacle and interrupt this streak. I always try to do my best no matter what is the tournament. This kind of mindset has helped me to be where I am. If I can repeat what I did in 2011? I don’t know. There are things out of your control. What you can influence is the present and how you can get in the position to do well in the future.”

“I know I can play better,” Federer said of the loss. “Novak was rock solid today, he played great throughout. He made very few unforced errors. He was able to take that opportunity that presented itself. I’m happy, feeling good and healthy.”

For Federer who has never won in Rome, it was his fourth loss in a final in 15 tournament appearances.

Djokovic heads into French Open next weekend focusing on the only major title he has never won.

“I don’t think I need to go and do anything more special for Roland Garros,” Djokovic said. “I just need to keep going on route.”

The Serb has won the Australian Open and four of the five Masters events this year, all of those he played in – Indian Wells, Miami, Monte Carlo and Rome.

He is 35-2 on the year, with his last loss coming to Federer at the end of February in the Dubai final. He is 14-1 against Top 10 opponents this year

The only drama for the world No. 1 came on this day came after the trophy presentation when a champagne cork popped and hit Djokovic in the forehead.

“We had an argument, Mr. Champagne and I,” Djokovic said. “He threw a punch and I won’t forget it.”