You are here: Home / Features / Novak Djokovic Could Face Rafael Nadal in the French Open Quarterfinals 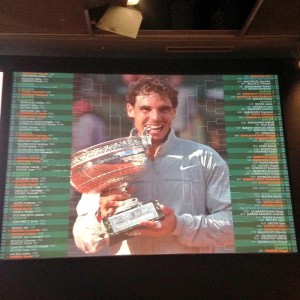 (May 22, 2015) Friday’s Roland Garros draw has nine-time champion Rafael Nadal projected to face No. 1 Novak Djokovic in the quarterfinals. Nadal, who is now No. 7 in the world is the sixth seed at the French Open this year.

Nadal who is 66-1 on the red clay of Paris, comes into the French Open this year with five clay court losses and no clay titles.

Djokovic comes into Paris seeking the last major prize he’s yet to earn – a French Open crown. The Serb not only has Nadal on his side of the draw, but also No. 3 Andy Murray, David Ferrer and 10th seed Grigor Dimitrov.

As for the women, No. 1 Serena Williams could have a challenging road ahead of her. The two-time champion could face No. 27 seed Victoria Azarenka in the third round, her sister Venus or Sloane Stephens in the fourth round, friend Caroline Wozniacki in the quarterfinals, with Petra Kvitova in the semifinals.

Serena Williams will play a qualifier in the opening round, while her Venus will face Sloane Stephens.

The French Open begins on Sunday, May 24.