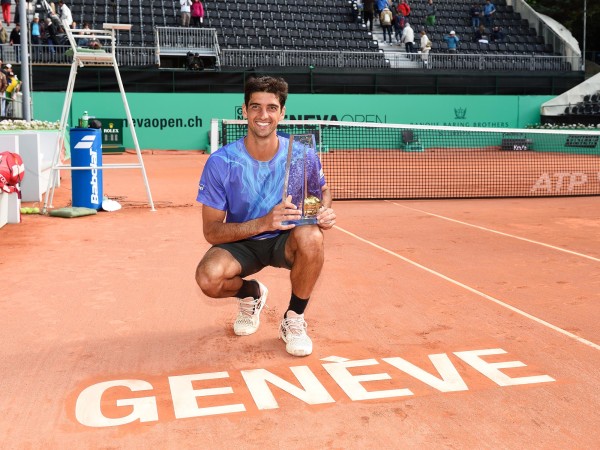 World No. 60 Thomaz Bellucci won the Geneva Open title on Saturday, beating sixth-seeded Joao Sousa of Portugal 7-6 (4), 6-4 for his fourth ATP World Tour title. The Geneva tournament returned to the tour after a 24-year hiatus. For the Brazilian, he’s won three out of his four titles in Switzerland. He captured crowns in Gstaad in 2009 and 2012.

“It wasn’t easy to play today,” said the winner. “It was very windy. I was more solid at the baseline. Mentally I was strong all week so maybe that was the key today… The conditions in Geneva are good for me. The ball bounces high and I like the clay courts here. It’s similar to where I practice in Sao Paulo. I’m feeling very relaxed and happy to win my third title in Switzerland. I hope to come back next year.

“I don’t have much time to celebrate because tomorrow I have to be practicing again for Roland Garros. This week gave me a lot of confidence, so I hope to keep playing like that and I hope to be ready for the next week.”

“I’m not happy today but I think that it’s still a good week for me,” Sousa said. I’m leaving for Paris with good rhythm and confidence. That’s very important before the start of Roland Garros. I won four matches here and I’m feeling well. It’s great that I reached the final here. I had a great week and enjoyed this tournament a lot.”

“I’m really, really happy to win the title,” Knapp said. “It’s never easy against Roberta, and as you saw it was a close match. But it’s great to get the win and gain some good confidence for the French Open.”

Twenty-one-year-old Dominic Thiem battled back to take his first ATP tour winning 6-7 (8), 7-5, 7-6 (2) over fourth-seeded Leonardo Mayer in the

“It’s really, really special; the first title ever,” said the Austrian. “It’s not only this, the match today was a really, really good level. Leonardo played outstanding and I was fighting until the end. I think it was one of the best matches I’ve ever played. The first title, I will remember it forever, so I will also remember forever Nice.”

“It was a very even match. We both played very well and I’m happy despite losing,” Mayer said. “This week, I showed some good tennis and I will get to Roland Garros with a very good level.”

Thiem, who is No. 42 in the world, has become the eighth player born in the 1990s to win a title on the ATP World Tour.

Samantha Stosur returned to the winner’s circle on Saturday defeating Kristina Mladenovic 3-6, 6-2, 6-3 to win the Strasbourg International, her first title of the year and seventh of her career.

The world No. 26 Stosur was given a wild card into the tournament at the last minute.

“To play as well as I did and walk away with the title, it’s exciting, and especially going into a Grand Slam,” said the 2010 French Open finalist.

The French Open begins on Sunday.