You are here: Home / Features / Eugenie Bouchard Bounced Out of French Open in First Round 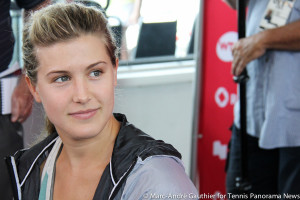 (May 26, 2015) After a year which saw her surge into the top ten, Canada’s Eugenie Bouchard’s 2015 has not lived up to her ranking of No. 6. Last year’s Wimbledon finalist and French Open semifinalist has made her first, first round exit at a major in her young career, falling to Frenchwoman world No. 44 Kristina Mladenovic 6-4, 6-4. The 21-yearold has now lost eight of her nine matches.

“I felt I was in the match,” Bouchard said. “But tennis-wise, I still knew I was far off from how well I can play. But, you know, I was in there, and I just felt like I couldn’t be as relaxed as I wanted to on the court.”

“Honestly I don’t know what to say. It’s been kind of the same as how I have been feeling recently on the court. Just not like myself.”
“I feel like I have been trying to work on what’s been going wrong, and I feel like I have been making progress. So to still have matches like this is actually disappointing. But, I mean, at the same time it’s just a tennis match and, you know, I need to not worry too much. Life is still good. Everyone has highs and lows in their career. This is a little bit of a low point for me.”

“On paper, that’s true, she’s had fewer wins, but, you know, last year her season was exceptional,” said Mladenovic. “So it is tough for her to have the same results. People are expecting a lot. And it’s true, people say that she’s lost some of her confidence. But, you know, for me I had to put out good tennis, because I felt, you know, if I was playing well at the right pace, the things she loves she would have beaten me, you know. And therefore, I focused on my game, I focused on my game. I tried to be smart, vary my game, and the things she doesn’t like to do I did them. I think I perfectly executed my plan today. Of course, I think she’s going through a more tricky moment for her. If you look at her results. But, you know, if you give her freedom on the court, she has a very high level. So as usual, I would say, you know, women’s tennis is so dense today. All players play well. For me and for her, I’d say, well, there’s nothing to be afraid of, given her level of game. She’s in the top 10, after all.”
Mladenovic escaped some second set drama letting a 5-0 lead slip to a 5-4 lead, but did finally serve out the match.

“It’s never easy to finish such a match with a crowd, as well,” said the Frenchwoman. “You know, they are frustrated, they are waiting for you. It’s not easy on your nerves, to be frank. I’m very satisfied, you know, in my head, first, to be able to finish the match, you know, 5-4, and I served well. Otherwise, you know, 5-5 could have been much more complicated.”
“Had I been afraid of winning, I wouldn’t have won this one, neither the first set nor the second one nor the whole match. If you’re afraid of winning, you will never make it, you will never win such a match. Against her on a Grand Slam on such a court, it’s a tennis match, it’s a sport. She relaxed a little. She was, her back on the wall, as we say. It’s never obvious, you know. We are all human beings. It’s never easy to finish such a match. As I said earlier on, she’s an excellent player. If you give her an opportunity, she will take it. She would seize it, and she had a number of winners. I didn’t make that many mistakes myself, and she played better. I was no longer in my game plan, and it was going her way for a while, and then I played well at 5-4. I had a good game.”
Bouchard will now head to the grass court season, hoping to right her game. “I expected a good season, better than that of last year, so I realized it won’t be the case all the time,” said Bouchard. “So I have learned a lot recently. Moreover, I have to be patient. The results won’t come immediately. I know I can go through difficult times.”