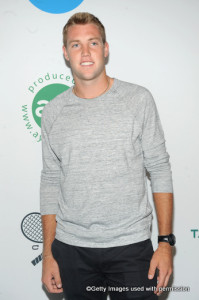 The last American man to lift the singles trophy at Roland Garros was Andre Agassi in 1999. Since then the U.S. men have not had much success on the red clay.

“This just suits my game very well,” Sock said. “Like I said, serve, forehand, I think it really complements those shots well for me. Serve is able to get up, forehand gets up, and it slows it down a little bit where I’m able to take my time and kind of maneuver the ball around. Movement is another big part of my game. I feel like on the clay get to a lot of balls, I can touch a lot of balls in the balls, which sometimes can frustrate guys when you get to one extra. Sometimes that can change a match.”

As for American men and their feeling about red clay, Sock said: “I hope as a whole for American tennis we can do well and we can get wins and kind of push to be somewhat where we were bunch of years ago when we had some of the American guys winning and doing well. But, yeah, as a whole we’re all pushing each other and trying to do very well. Each of us individually is also focusing on ourselves. I think when one of us does well it pushes the others to do well as well. I think that’s everyone’s mindset.”
Sock who began his 2015 season late due to a torn hips muscle, dealt with the illness of his older brother who had a lung infection.

“He’s doing much better now,” Sock said. “He’s got full I guess health back. He’s started working again. He teaches tennis back home in Kansas City with the coach I worked with growing up. Just the little things, strength and mobility, shoulder, he’s just had to do a lot of work to get back. He’s getting there and close to 100%.”

“It’s been a lot outside of tennis for me, a lot of stuff going on. It’s motivated me in a lot of ways to see a family member, and especially my brother — you know, I’m very close with him. To see him go through what he did… And I was in the hospital every day with him after I had surgery, so just back-to-back things that were very unfortunate. To see him battle and get through that when he was very close to not making, it was more inspirational I think than anything. Like people I think know in Indian Wells, when I started the year, I was out there and he was with me. I was playing for him, him and my family. Just doing the best I could for them and trying to make them proud. It’s kind of carried over every week.”

Sock’s countryman John Isner was winner on Tuesday as well. He beat Andreas Seppi 7-5, 6-2, 6-3. Isner isn’t afraid of the red dirt either.

“A lot is said about clay and how it’s a defensive surface,” Isner said. “It’s sort of I would say a misconception. I think clay is a very good attacking surface. A guy like Rafa(el Nadal), yeah, he plays great defense, but knocks the cover off the ball. He is greatest clay-court player of all-time. Me, on top of that, I’m a completely different animal than anyone. My serve is going to play no matter what the surface is and going to keep me in the match. So I’m comfortable on clay. I’ve played pretty well over here in Europe, which is nice. You know, I’ve had some bad European swings before, too. So feeling pretty good right now.”